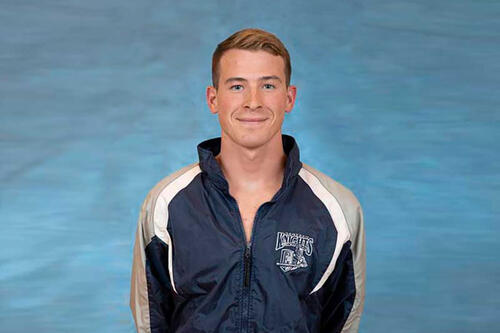 Harry Harkins ’21 has received the Congress-Bundestag Youth Exchange for Young Professionals (CBYX) Fellowship for 2022–23, funded by the German Bundestag and US Congress. Harkins holds a BA in international relations with a concentration in global political economy and a minor in German.

The highly competitive award annually provides 75 American and 75 German young professionals the opportunity to spend one year in Germany and the US respectively. Harkins will take two months of intensive German language training and a semester of classes at a German university, followed by a three- to five-month internship in his field, all while living with hosts in a cultural immersion program.

Harkins, from Sewickley, PA, began studying German in the sixth grade and immediately became interested in German culture. “In eleventh grade, I was transformed by a two-way foreign exchange program with a German student who has continued to be a great friend of mine,” he says. “We lived in each other’s homes, and that cultural exchange grew my interest in German into a passion, leading me to pursue a career in international business with a focus on Germany.”

Harkins swam all four years on Geneseo’s NCAA varsity swimming and diving team, earning SUNYAC First Team honors three times and participating in the Division III Championships in 2018. He also studied abroad in Switzerland at the University of Fribourg and served as head tutor of the German department and head presenter of the German Club. During Summer 2020, he interned with the German American Chamber of Commerce, Pittsburgh Chapter.

Harkins intends to continue his German language studies after his CBYX year and has already been accepted into the MBA/Master of Public and International Affairs combined degree program at the University of Pittsburgh. His long-term goals are to own an international business firm in either the US or Germany and eventually teach at an American or German university.

“Harry is a real connoisseur of American and German history and enjoys sharing that knowledge with others,” says Cynthia Klima, associate professor of German in Geneseo’s languages and literatures department. “He is deeply interested in the history and the culture of various European countries, especially the German-speaking ones. He enjoys spending time with others who speak different languages and, by showing his interest in their culture, exhibits a respect for and understanding of others.”

The CBYX fellowship competition was created as a public diplomacy program to promote understanding between the people of the United States and Germany. It’s open to students and alumni who are US citizens under 24 years of age. It is administered at Geneseo by Director of National Fellowships and Scholarships Michael Mills, who can be reached at millsm@geneseo.edu and 585-245-6002.

For more information about Congress-Bundestag and other nationally and internationally competitive scholarship and fellowship programs, visit Fellowships and Scholarships.