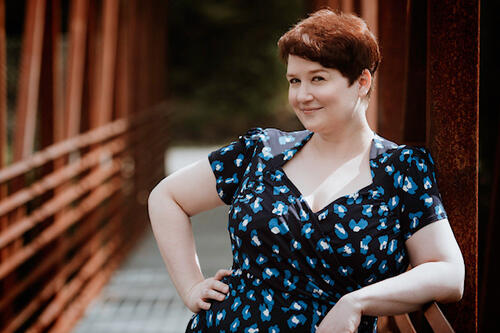 Elizabeth “Bizzy” Coy ’06 has won a 2020–21 U.S. Student Fulbright open study/research award for Ireland to earn a master of arts in creative writing at Dublin City University. The one-year, postgraduate degree program, established in 2018, will allow her to study under the acclaimed Irish playwright Marina Carr. Coy’s competitive grant brings this year’s total of Geneseo Fulbright awards to eight, an institutional record.

The Dublin City University program’s training in drama, fiction, poetry, and screenwriting will allow Coy to follow in the tradition of great humorists who excelled in a variety of forms, such as Oscar Wilde, Jonathan Swift, Mark Twain, and Dorothy Parker.

“Studying in Ireland will give me the opportunity to further explore the importance of written satirical humor, specifically the complex interplay and shared legacy of laughter between Ireland and the United States,” Coy says. “Humor has long been a powerful cultural method to skewer society’s foibles, speak truth to power and—perhaps most importantly—build bonds between people through shared laughter.”

Coy, who lives in Yulan, NY, majored in theatre at Geneseo, concentrating on playwriting, play analysis, literary criticism, and creative writing. Since graduating, she has published 30 pieces of short satirical fiction in major media, including The New Yorker, McSweeney’s, Vulture, The Establishment, and The Belladonna. Her co-written humorous plays have received public presentations at The Duplex, The Cell Theatre, and New York Theatre Barn, and she has earned creative writing fellowships from the MacDowell Colony, Puffin Foundation, and Platte Clove Artist Colony.

Coy’s satirical writing runs the gamut from “Witches Still Perform 75% of Household Magic,” which reframes current statistics about women outperforming men in household tasks, to “Brunch Recipes for When Your Therapist Is on Vacation,” which explores mental health issues through the lens of an unconventional recipe book.

“I see several meaningful roles for myself growing out of the Fulbright experience: humorist, using the written word to hold up a mirror to society’s complexities and absurdities; torch-bearer, an American of Irish descent carrying on the legacy of Irish and American humorists past and present; and connector, building bridges between Irish and American people through the shared power of laughter across cultural borders,” she says. “With the help of Fulbright, I plan to use the power of ‘funny’ to make a serious difference.”

For the 2017–18 Fulbright cycle, Geneseo was the first dedicated SUNY institution to be named a Top Producer of U.S. Student awards in any category—bachelor’s, master’s, research, or special-focus four-year institutions. Since then, for three consecutive years, Geneseo has been named a Top Producer by the State Department’s Bureau of Educational and Cultural Affairs in its annual article in The Chronicle of Higher Education.

The U.S. Student Fulbright competition is open to students and alumni. It is administered at Geneseo by Director of National Fellowships and Scholarships Michael Mills, who can be reached at millsm@geneseo.edu and 585-245-6002. For more information about the Fulbright and other nationally and internationally competitive scholarship and fellowship programs, visit Fellowships and Scholarships.