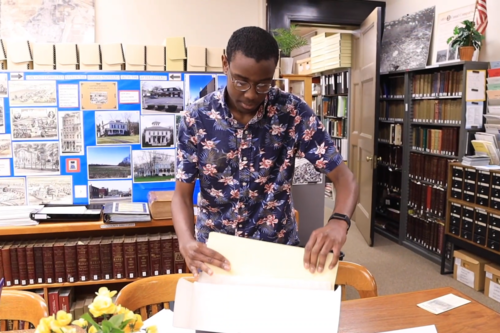 The Robert David Lion Gardiner Foundation (RDLGF) has awarded SUNY distinguished professor of history Michael Leroy Oberg, the SUNY Geneseo Center for Local and Municipal History, and a consortium of six other colleges and universities a three-year grant of more than $300K for The Gardiner Foundation Semiquincentennial Student Fellowship Program. SUNY Geneseo and several of the institutions in the fellowship program have committed $150K of matching funds for the project, bringing the total to over $450K.

Fifty undergraduate students at these seven New York State colleges and universities will be partnered to work with municipal and academic historians on projects related to the American Revolution and its legacy as the 250th anniversary of American independence approaches.

"This is an exciting opportunity for Geneseo students and history students across New York State,” says Oberg. “The American Revolution means different things to different people, and the Gardiner Foundation Semiquincentennial Fellowship Program will provide students and government-appointed historians across the state a chance to reexamine the Revolution and its legacies at the local level as we approach the 250th Anniversary of American Independence."

Kathryn M. Curran, executive director of the Robert David Lion Gardiner Foundation said, “RDLGF is delighted to be able to support this statewide initiative. Student Fellows from every area of New York State under the guidance of their professors will work with the archives of municipal historians and regional historical societies to flesh out those individual roles in the larger story of the American Revolution. We believe this is the first such initiative, marshalling professors, historians and students across our region to create an online exhibition and book on their findings. It is RDLGF’s hope that this will be a model for future collaborations covering a verity of topics.”

Among the questions students will consider include:

· How have New Yorkers defined "life, liberty, and the pursuit of happiness" through the years since American Independence?

· What have New Yorkers meant when they say they believe that "all men are created equal," and how has that changed over time?

· How have New Yorkers remembered the American Revolution and its conflicting legacies since 1776?

The program will commence in the fall of 2022. The grant will help support student fellows for a summer applied research opportunity, stipends for academic historian mentors, and compensation for local historian hosts. Other covered expenses include funding to support an undergraduate web admin to upload student projects onto Geneseo's center's website, the publication of a free downloadable book that compiles the projects, and other associated expenses.