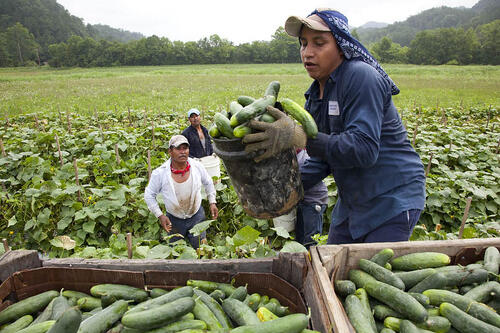 A three-year study by SUNY Geneseo anthropologists shows that driver licensing restrictions between 2001 and 2020 led to increased social isolation and health risks for immigrant and migrant agricultural workers and their families in Western and Central New York. The researchers identified factors that prevent immigrants from leaving the farms where they work and the detrimental effects that that follow isolation. They also argue that state-and regional-level policies can mitigate the outcomes for local farmworkers.

After 9/11 in 2001, and until January 1, 2020, New York State required applicants for driver’s licenses and vehicle registration to supply a social security number, a policy that prevented undocumented individuals from getting driver’s licenses or registering vehicles they purchased. “As a result, Latin American farmworkers were caught in a bind, needing to drive but unable to do so safely and legally,” said Assistant Professor Jennifer Guzmán.

In their study “Damned If You Drive, Damned If You Don't: Meso-level Policy and Im/migrant Farmworker Tactics under a Regime of Immobility,” published in Human Organization, Guzmán and Associate Professor Melanie Medeiros found that geographic factors that impede workers’ movement include the distance between farms and from town centers; climatic conditions that prevent the use of alternative transportation such as bicycles during much of the year; and a lack of public transportation in rural districts. “While all of these circumstances pose barriers to mobility, they are not unlike those faced by all rural residents,” Guzmán points out.

In order to secure necessities (groceries, clothing, and medications), visit family and friends, and access medical care, the farmworkers in the study resorted to a few key tactics. The most common involved paying informal-economy drivers—raiteros—for rides to stores, pharmacies, and medical offices. Raitero services, however, were unreliable and expensive.

“Ride costs strained family budgets, and raitero unavailability gave rise to dangerous and frightening crises in cases of injury and sickness,” the authors explained. “Interviewees reported being unable to access urgent care for sick children and even ingesting veterinary pharmaceuticals out of desperation when they were unable to get a ride to medical facilities.”

The researchers say that among farmworkers who had lived and worked in the region for longer periods—farmworkers interviewed for the study have been in the region between two and seventeen years—often resorted to driving. This strategy afforded autonomy but elevated risks, as farmworkers were obliged to drive without the security of official vehicle ownership or driver’s licenses.

Guzmán and Medeiros point out that much of this region of New York State is located within 100 miles of the US-Canada border, where Border Patrol has the authorization to circulate, interrogate, and detain people. Local law enforcement agencies and officers also engage in “poli-migra” cooperation, contacting Border Patrol during interactions with individuals who are not strong English speakers or who lack a driver’s license.

Parents in the study emphasized that family life and subsistence required their driving, even while it exponentially increased their chances of being detained, deported, and separated from spouses and children. In light of the costs and risks associated with driving and using raiteros, some farmworkers reported that they minimized or even eliminated trips off the farms altogether. While the tactic of avoidance was arguably safe, farmworkers associated it with sadness, social isolation, and the reduction of life to bare survival.

“Our findings demonstrate that the confinement of Latin American labor on farms is simultaneously a social and a legal achievement—the coalescence of fear, lack of resources, and continuous reproduction of immigrant marginality,” says Guzmán. “While efforts for federal-level immigration reform are important, changes to state and local policies and practices, especially state driver’s license policies, poli-migra cooperation practices, and investments in rural-urban public transportation infrastructure may be of greater importance for ensuring public safety, alleviating chronic immobility, and improving immigrant families’ health and quality of life in the shorter term,” she said.

Legislation concerning access to driver’s licenses has become one of the most dynamic and impactful areas of immigration-related policy over the last several years. In thirteen states, Washington, D.C., and Puerto Rico, individuals do not need to present evidence of authorized residency to obtain a driver’s license.

“Participants in our study, which included 30 interviews with individuals who work directly with immigrant farmworkers as advocates or social service and healthcare providers, were unanimous in the belief that access to driver’s licenses will materially improve immigrants’ and their family’s lives," Medeiros said. "Though it will not resolve the multiple forms of precarity that undocumented individuals and mixed status families experience, it has the potential to ameliorate some of the pernicious effects of illegality. With driver’s licenses, individuals gain the autonomy and safety that is associated with driving legally."