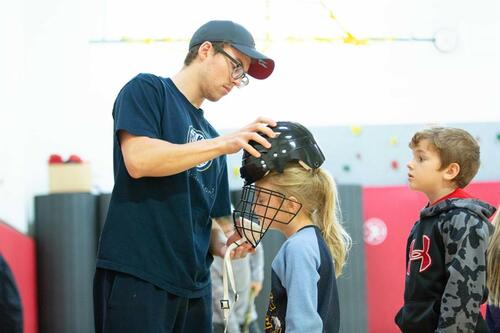 Stephen Mott ’18 from Nesconset, NY, who graduated in December, is a thoughtful, plan-ahead kind of person whose conversation already has the careful cadences of the lawyer he intends to be. So it comes as a surprise to learn he also plays the fast-paced, in-your-face sport of hockey.

“I’ve played ice hockey since I was a kid, and I played club hockey for four years, and I loved it,” he said. “It also helped me academically and socially as well, since you’re challenging yourself to get better.”

And there it is: Mott loves the sport, but he also loves the values it conveys to players. That desire to share hockey’s lessons with others led him to a Fall 2018 Student Ambassadorship in Community Engagement, where he created a dek hockey (ball hockey) club at the Dansville Primary School in an effort to address the limited availability of youth recreation activities in Livingston County.

“Being able to reach out to Dansville and get the kids involved, even if it was just for an hour in the day, even if they weren’t necessarily practicing hockey skills, just the chance for them to interact with their peers, was something I really enjoyed,” Mott said. In a relaxed, fun, and engaging environment, students learned about the importance of participating in healthy activities and other recreational opportunities.

Mott developed his leadership skills in other activities on campus as well: He was a mentor in the GOLD Program (Geneseo Opportunities for Leadership Development), an assistant volunteer coach for the Geneseo Special Olympics, and secretary of the Student Association Senate.

“Geneseo’s promotion of getting involved, meeting everyone, and the small, tightly knit campus helped me become comfortable not only academically but co-curricularly,” he said.

Knowing when he arrived on campus that he wanted to become a lawyer, Mott sought out pre-law advisors early on, getting their help with scheduling classes and applying to law schools. The history major and philosophy minor noted that “knowing those two subjects was very helpful in arguments and writing.” Summer internships with the Suffolk County Legislature page program paved the way for his current job as a clerk with the U.S. Bankruptcy Court in New York’s Eastern District, which he began right after graduation.

“I’m not at the point where I’m an attorney and can give them legal advice, but I make sure everything is in order,” he explained.

Law school at George Washington University in Washington, DC, is on the docket for this fall. Mott isn’t too interested in the government sphere, even though he’s working in the bankruptcy court now. “I’d really like to work in a private firm in securities down in the DC or Virginia area,” he said. “It’s a very intriguing field; you can find something new to learn every single day.”

Ultimately, he said, “I want to enjoy my job every day and continue to live the values I learned at Geneseo.”