Oberg Elected Fellow of the New York Academy of History 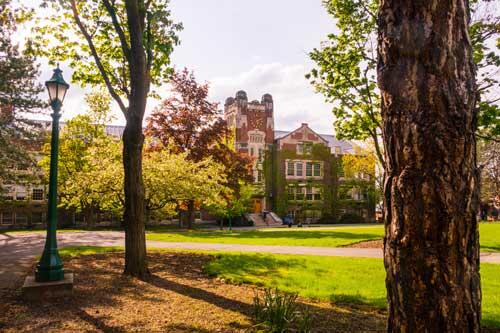 GENESEO, N.Y. – Michael Oberg, Distinguished Professor of History at SUNY Geneseo, has been elected a fellow of the New York Academy of History.

Membership in the academy is by invitation only and is limited to those with a demonstrated record of accomplishment in New York history as authors, archivists, public historians, teachers, librarians, administrators and others. He joins a distinguished group of 200 in the academy.

Oberg is a leading international authority on the intersection of colonial English and Native American societies. He has published seven books and is under contract for one more. He also has published a variety of seminal articles and other writings.

His latest book, “Peacemakers,” a history of the Treaty of Canandaigua, was published last summer. He is currently preparing a second edition of his college textbook, Native America: A History, for publication in 2017, and has started work on a massive history of the Onondaga Nation, from the founding of the Iroquois League to the present.

Oberg has been a member of the Geneseo faculty since 1998. From 2005-08, he was the James and Julia Lockhart Supported Professor at Geneseo.  In 2013, he received the SUNY Chancellor’s Award for Excellence in Research and Creative Activities and in 2003 the Chancellor’s Award for Excellence in Teaching.  In the spring of 2014, he was the McLellan Visiting Distinguished Professor of North Country History and Culture at SUNY-Plattsburgh.

Oberg earned his doctorate from Syracuse University and his bachelor’s and master’s degrees from California State University, Long Beach.