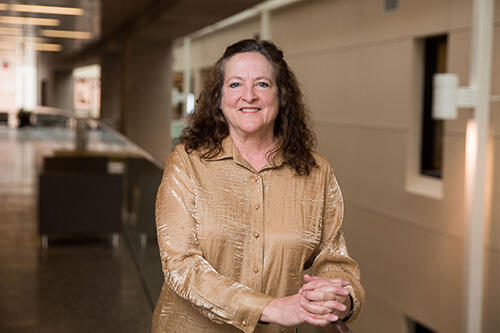 GENESEO, N.Y. -- For nearly 20 years at Geneseo, associate professor of anthropology Barbara Welker has kept her phone nearby; she has to be ready to spring into action.

Welker has become the go-to adviser and volunteer for local police agencies for her forensic expertise.

When bones are found locally, Welker is often called to determine if they are animal or human. She has been called nearly two-dozen times.

“It has mostly been bunnies, deer, and cows,” she said.

The New York State Police, Livingston County Sheriff’s Office, and the Livonia Historical Society are some of the agencies that have enlisted Welker’s help through the years.

The police have frequently brought her the suspect bones to the parking lot adjacent to South Hall on campus. Other times they request Welker to travel to a particular site.

“I remember state troopers pulling up to the bridge in between Fraser and Sturges Halls and taking me away; everyone was watching me,” said Welker.

Recently, they brought her to the IGA grocery store parking lot near Nunda, N.Y., approximately thirty-minutes southwest of the College for some investigative work. It turned out to be cow bones.

“Barbara Welker is a resource for the Sheriff’s Office by offering her expertise in the anthropology department” said Livingston County Deputy Sheriff Michael Williams. “She makes herself available at a moment’s notice to assist with the identification of found bones, and to determine if they are animal or human. It is nice to have a local resource when needed.”

Welker is known locally for her work in 1998 that could be out of a fiction story.

Police led her out to a state trooper’s cottage on Conesus Lake, where they had found two dismembered bodies floating near the dock.

“I could see that the pelvis was human,” she said.

Welker raced back to campus to grab her human osteology book, which helped her determine the age of the individuals based on the how developed the fused growth plates were between the bones.

Welker was able to conclude that the bones were most likely from two adolescent males who had drowned. She was right. This case was one of the highest profile in the region to date and is remembered by many Conesus Lake locals.

When she’s not out on the field, Welker leads the College in ensuring compliance with the Native American Grave Appropriation Act. She must determine the origins of bones within the collection and notify Native Americans for potential repatriation.

She is also the co-chair of the President’s Commission on Environmental Sustainability and is tasked with advancing the College’s sustainability education program and reducing environmental impact.

“I want to bring greater publicity and awareness to sustainability, and show students how the concepts I teach in class apply to real life,” said Welker. "It is all about using expertise to add to the community."