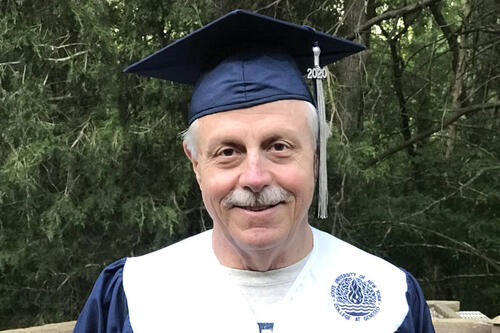 A full 47 years after leaving SUNY Geneseo one course short of his degree, Andre “Bud” Welter ’73 will graduate this year with a bachelor’s in geological sciences.

“I still can’t believe I did it,” confesses Welter, who completed the missing three credit hours at Central Piedmont Community College (CPCC) in Charlotte, NC, in December 2019. “I look at my transcript, and there it is, an A in calculus.”

Leaving school so close to graduating may be hard to understand now, but Welter says the political environment was very different then. “We had this little issue overseas called Vietnam,” he explains. “Then just as May of 1973 was coming up, President Nixon ended the military draft.” Without a fear of the draft or an urgent need to retake a failed course, “I said, ‘You know what, folks? I’m out of here.’ And life just grabbed me up and whisked me away.”

Life led Welter to a long and successful career in the tire and custom wheel industry, working as a buyer at American Tire Distributor in Charlotte, NC. “That black rubber they put around the wheels? That's the boring part,” he laughs. “I was blessed to work with the shiny part in the middle. For the last 30 years as a buyer, I got to spend millions and millions of other people’s money.”

During that time, Welter never forgot about his unfinished Geneseo degree. “It's like when you walk out the door, and you have this voice in the back of your mind that asks if you turned off the light or locked the back door,” he says. “My voice was saying ‘Three credit hours, you're missing three credit hours.’” Constant travel for work prevented him from listening to the voice—until 2018, when corporate changes led to Welter being downsized. With free time and encouragement from his family, he decided to take the plunge.

Welter began with three online remedial courses to elevate his math skills, which he followed with a class in pre-calc before tackling the required calculus course. “It was like, ‘Well, hello, math side of my brain,’” he says. “There were times when I woke up at 2:30 in the morning wide awake doing equations in my head.”

The hybrid of online and in-person courses delivered material very differently than in 1973, Welter says. “Back then, we had one Wang calculator for the whole department, and you would stand in line with 20 other students waiting your turn to try to come up with the same answer.”

On the last day of his last class, Welter’s calculus professor at CPCC awarded his hard work with a medal for courage. “He gave it to me in front of the 29 other students—all of them a third of my age,” Welter says. “I was stunned, incredulous … and likely a little red-faced.” The students gave him a round of applause.

Welter earned accolades from Geneseo, too. “When I passed, I emailed Dean [of Academic Planning and Advising Celia] Easton, and she gave me an official ‘Woo-hoo!’” he says. “I replied that ‘woo-hoo’ is not quite as good as a degree, but it’s a very, very, very close second.”

Welter says he thanks God for the many blessings that have brought him to where he is today. He and his family still plan to attend his commencement ceremony in Geneseo, now postponed until 2021.

“Am I disappointed that graduation has a slight kink to it?” he asks. “Yes, of course. But after waiting 47 years for this to happen, what’s waiting one more?”