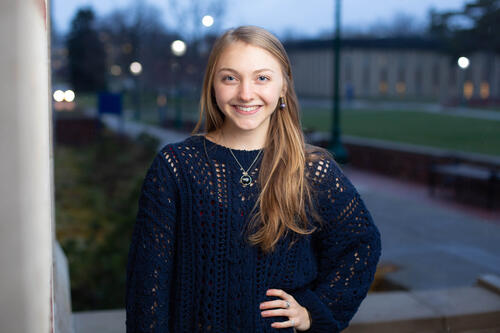 SUNY Geneseo student Angela Catalano ’20 has won a Benjamin A. Gilman International Scholarship in support of her Spring 2019 study abroad to Costa Rica. Catalano is a psychology major from Webster, NY and will be studying at the Universidad Veritas in San Jose in the spring.

In January, Catalano will depart for San Jose, the country's capital and home to the University Veritas, which was founded in 1975 as a campus of the larger "Universidad Autonoma de Centro America” (UACA). The first private university in Costa Rica, Universidad Veritas is now an independent university with a student enrollment of nearly 1,500. Students in the 12-week study abroad program live with San Jose families selected to match the housing needs of program participants and do so to facilitate full immersion in Costa Rican culture.

Catalano says that living with a host family is something that “I am both excited and nervous, as it will be a new experience. Mostly, though, I am eager to be part of a Costa Rican family and experience their lifestyle, connect with them, and have constant Spanish practice as well. It would be especially good to be in a home with children, an experience that will help prepare me for my future career and decide what age group I best communicate with.”

One of Catalano’s motivation for choosing Costa Rica involved her desire to increase her ability with Spanish so that she will be more effective in her career. She was inspired to do so by the example set by her older sister Haley. “During the summer of 2016, I was able to save up enough money to visit my bilingual sister as she was living and teaching English in Manizales, Colombia," Catalano said. "At that point, I had taken four years of Spanish in middle and high school but had lost some of my ability. I was in awe of my nearly-fluent sister as she effortlessly communicated with locals and navigated us through our adventures.”

As part of her study abroad curriculum, Catalano will continue the language classes she has been taking at Geneseo with Intermediate Spanish, and Spanish Conversation, as well as the courses ART 2130: Mural Painting and Public Art; Art 1301: Basic Principles of Drawing; and HHD 1050: Holistic Health Approaches. During a recent teaching internship at a local K-12 school here in Western New York, Catalano had a life-changing experience with helping “new students from Spanish-speaking countries who speak very little English become acclimated to their new school.” Interacting with those children made her realize “how important knowing Spanish will be in my future career as a child psychologist. I am very passionate about mastering the language because there is a growing Spanish population in America who deserves access to psychological support and resources.”

Catalano is especially interested in the Mural Painting and Public Art course at University Veritas as a means of connecting with the local Costa Rican community and learning more about graffiti painting as an art form, “which is prevalent in my home city of Rochester and has always intrigued me. The course includes a Service Learning component during which I will either facilitate a workshop for children in a rural community or paint a mural as a donation to the community — both of which would be incredibly rewarding and would be the most unique volunteer opportunities I have encountered thus far.”

Like many Geneseo students who undertake study abroad, Catalano sees her semester in Costa Rica as part of her continued self-growth and education. “Watching my oldest sister do extensive solo traveling over the years showed me first-hand how life-changing independent travel can be, and how much maturation comes out of it as a result as I feed my hunger to experience something different and embrace uncertainty," Catalano said. "I have my sister and my trip to Colombia to thank for igniting my passion for Spanish again. Someday in the future when I travel with Haley, I hope can take the lead on our adventures, using all of the Spanish that this trip and my continued education will help me acquire.”

The summer and 2019 academic year application period for the next round of Gilman Scholarships will open in mid-January with a March 5, 2019 submission deadline.

Students seeking more information about, and help with applications for the Benjamin A. Gilman International Scholarship and any other fellowship or scholarship program should contact Michael Mills, Director of National Fellowships and Scholarships, at millsm@geneseo.edu or (585) 245-6002.