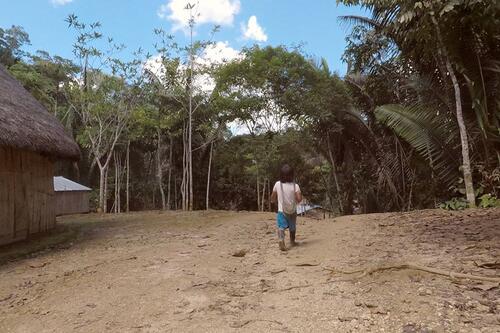 Geneseo’s Department of Political Science and International Relations will present a special screening of the documentary Who Speaks for Nature? by Larry Engel on Friday, March 29, at 4:30 p.m. at the Riviera Theater in Geneseo. The screening is free and open to the public.

The documentary, an official selection of the 2019 Environmental Film Festival in the Nation's Capital, is based on the book Who Speaks for Nature? Indigenous Movements, Public Opinion, and the Petro State in Ecuador (Oxford University Press, 2019), by Geneseo Associate Professor Karleen West and Todd A. Eisenstadt, a professor of government at American University. A discussion with Engel and West will follow the film screening.

West and Eisenstadt collaborated with indigenous groups in Ecuador to examine the effects of big oil and mining and why some indigenous groups have been more successful at protecting their land from extraction. Engel accompanied West and Eisenstadt to Ecuador on their most recent research trip in 2017. That trip was part of a seven-year effort for the researchers, who have presented their work internationally.

In 2017, West invited Patricia Gualinga, a leader of the Kichwa Nation of Sarayaku in Ecuador, to speak with students and present a public lecture about the Kichwas' successful fight for land preservation.