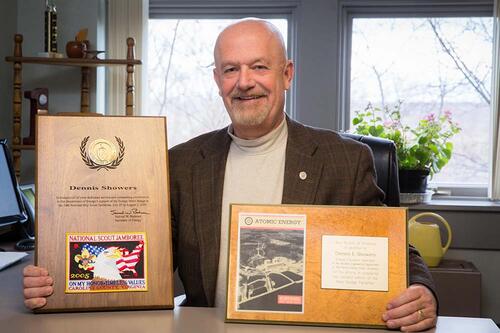 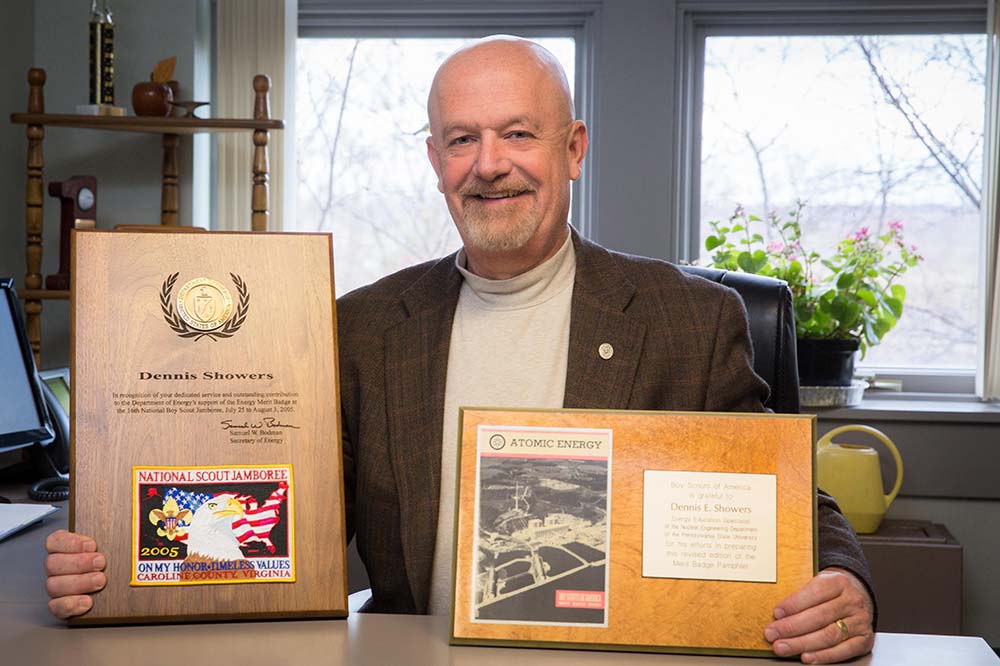 Not directly, that is.

Behind the scenes, however, his influence could help shape the energy policy of the United States one day — and with it, the corresponding social, political and economic reverberations around the world.

As the author of not one, but two energy-related Boy Scouts of America merit badge pamphlets —Atomic Energy and Energy — Showers has helped inspire youth to pursue education and STEM careers that may yield future energy policy advisers and industry leaders.

Merit badge books provide information and required activities to help Scouts learn skills, discover hobbies or pursue careers in 137 different subjects. A total of 21 merit badges —13 required, eight electives — must be completed as partial fulfillment to achieve the highest rank of Eagle Scout, which Showers earned in 1971 growing up in Wingate, Pennsylvania.

Proving that sometimes “you can go home again,” in 1981 Showers joined his alma mater, Penn State University (B.A. ’75, science education) as an Energy Education Specialist in its Nuclear Engineering Department. He conducted public education programs for teachers and public utility power plant personnel, as well as girls and boys in schools and a variety of youth education programs such as Girl Scouts, Boy Scouts and 4-H Clubs.

“One of our programs in 1982 was a science and energy specialty camp in Chester County near Philadelphia where Boy Scouts earned Energy and Atomic Energy merit badges as well as Space Exploration and Astronomy,” Showers recalled. “I found we were using the same Atomic Energy book that I used to earn that badge in 1968!”

As an educator, Showers called the BSA’s merit badge program director, explaining that the Atomic Energy book was not well written or designed. When asked if he’d be willing to help write a new version, Showers was quick to reply.

Showers secured a $7,000 grant from Westinghouse Electric Corporation which supported writing a new Atomic Energy merit badge pamphlet; it debuted in 1983. Then, in 2004, he initiated revisions changing the badge to Nuclear Science, broadening its scope and content. He rewrote the requirements and participated in producing the new merit badge book.

Based on this work, the BSA soon called on Showers to help with a related project. The organization was revising its Energy merit badge pamphlet — first introduced in 1976 — and now sought his review of the first draft given his expertise. Showers had since earned his doctorate in curriculum and instruction (Penn State, 1986), and viewed the task from a curriculum development perspective.

Soon thereafter, the original author withdrew from the project, and the BSA turned to Showers for help completing the project. He found the draft so badly prepared that instead, he offered to start anew, designing and writing the new pamphlet in nine months. Published in 2005, this work garnered praise by officials with the U.S. Department of Energy as an excellent educational tool for teaching about energy.

“The Energy merit badge book focuses on the leadership needed to make good energy policy decisions, based on understanding good personal choices that are made by understanding energy-using technologies, which requires knowledge of the science of energy,” Showers said. “People need to understand the technological limits of gas mileage or appliance efficiency to make personal choices, and leaders need to understand these things to come up with sound policies.”

As the BSA explains on the Energy merit badge website, “Saving, producing, and using energy wisely will be critical to America's future. If we are to leave future generations with a world in which they can live as well or better than we have, Scouts and other potential leaders of tomorrow must begin the hard work of understanding energy and the vital role it will play in the future.”

Recent data compiled by the BSA shows that the Energy merit badge was earned more than 25,000 times from 2009-15 compared to nearly 47,000 for Nuclear Science during the same period. The friendly competition is a win-win for energy awareness, and underscores Showers’ simple message woven into the Energy merit badge.

“Everything we do individually and as a society relates to the different forms of energy we use,” he stated. “Starting with Atomic Energy, I consider this work my most important accomplishment as a science educator to have directly affected the STEM experience of more than 100,000 potential scientists and engineers since 1983,” he added.

In the years following publication of both pamphlets, Showers has enjoyed a bit of fame, participating in “book signings” with local Scouting councils and also at BSA’s signature event, the National Scouting Jamboree, held once every four years.

Looking back, Showers takes pride in the work he’s done — and still does — on behalf of the BSA, evidenced by commendations on his office wall.  Equally rewarding are his contributions to Geneseo in and out of the classroom, including his work on the leadership team of the Robert Noyce Teacher Scholarship Program, supported by a five-year, $1.2 million National Science Foundation Award.

In 2005, Showers was recognized with the Chancellor's Award for Excellence in Faculty Service, and in 2003, the Award of Excellence from the Xerox Center for Multicultural Teacher Education.