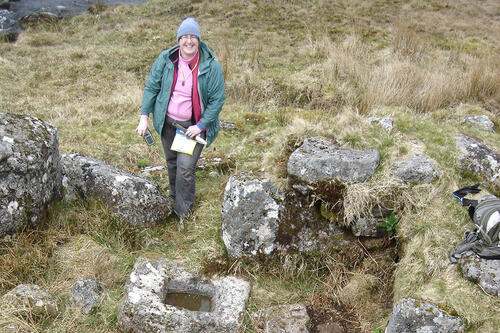 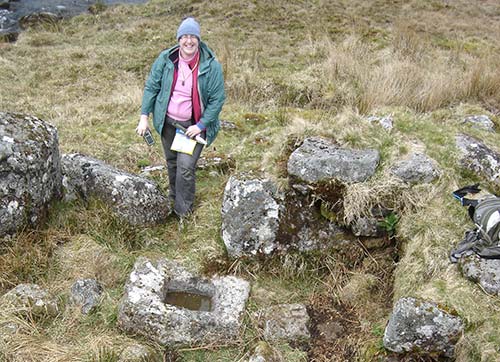 In the process, students often discover something more: a renewed sense of confidence and a deeper interest in learning about the natural world. That’s because Farthing shares her passion for geology in a way that dispels students’ misguided notions that they “can’t do science.”

“Many students come in with a wall, and I want to break down that wall,” said Farthing, who joined Geneseo in 2004. She teaches GSCI 120/121 “Our Geologic Environment,” an introductory course and lab, in addition to upper-level courses.

To make her point, she begins the first day of her 120 class showing a scene from “Finding Neverland.” Johnny Depp’s character suggests that his dog is a bear, to which a skeptical child with little imagination responds, “It’s just a dog.” Farthing uses their exchange — and that “candle-snuffing word”— to break down the wall.

“If you tell me you’re just a psychology major or you’re enrolled in just a nonscience program, you are limiting yourself,” she warns her students. “No matter what your field, we are all scientists. That’s especially true for liberal arts students; we all live on this planet and understanding its processes and the features we see around us is important.”

To that end, Farthing believes there’s no better science than geology to help students feel less intimidated because “it’s touchable and visible.” As she explains, “they see the meandering river and the exposed rock,” not to mention a multitude of other geological features observed and explored in the field through departmental outings.

Over the years, the Department of Geological Sciences has created a strong sense of community among faculty, students and alumni through picnics, reunions and annual campouts that mix recreation with research activities. In addition, there’s the biennial intersession trip to geologically-diverse destinations for several weeks between the fall and spring semesters.

This year, 37 students and five faculty members, including Farthing, will travel to New Zealand. Previous intersession trips have included Chile (2015), Puerto Rico (2013), and Death Valley and the Grand Canyon (2011).

“I came to Geneseo kind of undeclared but I knew I wanted to do something in the sciences,” he said. “I took Dr. Farthing’s ‘Introduction to Geology’ and I really enjoyed it. Toward the end of the semester, I inquired about the major. She gave me a bunch of information and really got me amped up, and I said, ‘I’m going to go for it and declared geology.’ The trip to New Zealand will be my first time. It’s going to be unbelievable — I can’t wait.”

This semester, Farthing took a hiatus from teaching the introductory course to lead GSCI 391, a geological science capstone seminar required of all geological sciences majors and those going to New Zealand. The seminar provides a foundation of general research concepts and covers literature regarding the work done in the places that they will visit and likely collect samples for analysis.

In addition, she also is coordinating all travel logistics and planning for the trip. Destinations include Christs Church, Fox Glacier, Tongariro Alpine Crossing, Mt. Cook, White Island, the Taupo and Rotorua regions and Auckland.

The department’s flexibility to schedule Farthing in this manner — as well as its capability to provide students with valuable field experiences — is made possible in part by alumni contributions, including a generous gift from Geneseo Foundation Board member and geology alumnus Paul Peterman ’80, who created the Paul Peterman '80 Endowment Fund.

For Farthing, that kind of support makes a world of difference: Her love of teaching is matched only by her passion for research — her own and the students’ she mentors. In fact, Farthing is among a small group of geologists in the United States who are experts in slag, the by-product of metal-making, specifically from the 1800s.

“I love slag,” said Farthing, who sees “glorious beauty” in its zircon crystals that she has magnified and photographed for her book, “The Art of Slag” as well as holiday cards. “It’s igneous, man-made lava. I’m interested in how it breaks down and the effects on the environment.”

Farthing’s research has led her near and far, from New York’s Adirondack region and its abandoned “pig-iron” blast furnaces to Great Britain’s historical tin smelting sites from centuries ago. Part geologist, part archaeologist, she’s fascinated by the sleuthing that comes with putting together the puzzle pieces of the past.

"If you show me a British tin slag sample, I can tell what kind of furnace was used,” she said. “I’m attracted by both the archaeological and environmental perspectives.”

As a mentor, Farthing provides field research opportunities for students to help them gain experience in mapping, sediment and water sample collection, and analysis.

“Working for Dori felt more like a partnership and not like I was simply carrying out another person’s research,” said Lauren Brandt ’17, reflecting on her research with Farthing this past summer at Catalan Forge near Potsdam and Lion Mountain, site of the world’s largest catalan-process forge. “She definitely gives students the freedom to explore whatever intrigues them.”

Active in professional societies, Farthing most recently presented her research to the mineralogy section at the Geological Society of America (GSA) meeting in Baltimore in 2015. Her data on the archaeological aspects of glass produced during tin-smelting in England in the 1700s — and particularly, her photos of zircon grains — caught the attention of Aaron Cavosie, senior research fellow in the Western Australian School of Mines at Curtin University in Perth. He specializes in zircon, focusing on aspects associated with meteorite impacts.

The zircon grains Farthing found in nature were remarkably similar to the ones Cavosie collected by creating them in his lab, under pressure imitating a meteorite strike.

“Many people think zircon forms because of high impact, but I found the same ones in slag, which is produced from heat,” Farthing noted. “So it’s not pressure, but rather, temperature, that may produce this mineral. My research really sinks a nail in the coffin on that high pressure interpretation.”

She and Cavosie co-authored a paper, and he presented the first abstract of their work at the 2016 GSA meeting in Denver last September.

“The work that Dori and I are engaged in is wildly cross-disciplinary,” Cavosie said. “Results can range from archaeological implications for medieval metals smelting technology all the way to meteorite impacts and evolution of planetary crusts, including the impact history of the Moon.  It doesn't get more mind-blowing than this … how often do you get a chance to learn new things about 4 billion-year-old impacts on the Moon from 300-year-old tin-slag?”

“This is just shedding more light on the mystery of how things form on our planet,” Farthing said. “And I love being a part of that.”

It’s the same feeling of discovery and satisfaction that comes with teaching.

“I don’t expect all of my students to become geologists, though I’m thrilled if they do,” she noted. “But I do want them to walk out of that class saying, ‘Wow! I can do science! That was interesting.’”