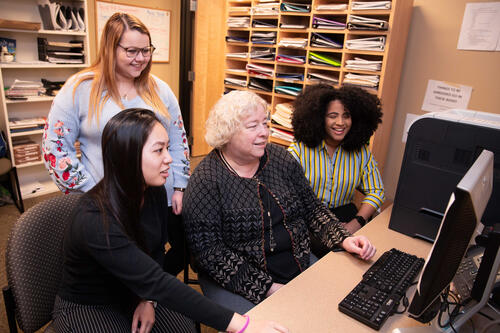 As longitudinal research studies go, Ganie B. DeHart’s work on sibling and friend relationships is in the midst of an extraordinary run.

DeHart, a SUNY Geneseo Distinguished Teaching Professor of Psychology with a specialty in child and adolescent development, recently surpassed the silver anniversary of her ongoing study, which started in 1993. For psychologists, the ongoing observation of the same people over time provides rich data for in-depth insight on behavioral development.

“I had no idea this would turn into a longitudinal study that would continue for more than 25 years, but the fact that it did is mostly due to my students,” said DeHart, who recently completed nine years as chair of her department. “Originally I just wanted to look at 4-year-olds' conversations with siblings and friends, but my undergraduate research assistants kept finding new behaviors to study using videos. As the project got bigger, I was able to delegate more to my students and keep them engaged with the research.”

DeHart’s interest in childhood sibling and friend interactions stems from her dissertation research, which focused on early childhood sibling and mother/child interactions. She joined the Geneseo faculty 30 years ago, and five years later recruited her first group of participants — 32 Western New York families with pairs of siblings who were either 2 and 4 years old or 4 and 6 years old. All the sibling pairs in the original group were sisters or brothers; the study later added 33 mixed-sex sibling pairs.

Evaluations of 4-year-old recruits and their siblings continued for the same children at ages 7 and 17. Along the way, an additional 60 families were added to the study to expand the sample into middle childhood and adolescence. An online early adulthood follow-up is now underway.

Even though DeHart and her team continue to gather and analyze data — especially from the adolescent and early adulthood phases of the study — the work has yielded several interesting observations related to aggression and the use of language between siblings and friends. For example, in identifying differences in sibling and friend interactions at a young age, DeHart says gender rules don’t seem to apply as much in sibling relationships as they do in friendships.

DeHart’s findings are different for relational aggression — especially the “mean girls” type of aggression, in which kids say or do things to damage a relationship or use a relationship to inflict pain. Her findings corroborate other researchers’ observations that girls use more relational aggression with friends than boys, especially in middle childhood and adolescence. But the gender difference disappears during sibling interactions.

DeHart also found a big gender gap between boys and girls in how they talk to friends at a young age. Previous researchers have found that boys use more assertive language, which is intended to accomplish a goal, and girls use more affiliative language, intended primarily to sustain social interaction.

DeHart also has observed that the differences in relationships between siblings and friends decrease as kids get older because friendships start to look more like sibling relationships.

“I thought as aging occurred that sibling relationships would look progressively more like friendships because the siblings would gradually be on a closer to equal footing developmentally since the age gap between a 15-year-old and a 17-year-old is a lot less significant than the gap between a 2-year-old and a 4-year-old. But that didn’t happen,” said DeHart. “Instead friendships started looking like sibling relationships. Four-year-olds are nice to friends, 7-year-olds not so much, and for adolescents, all bets are off. It turns out that intimacy and familiarity seem to be the key elements in these relationships over time, rather than relative developmental differences.”

Over the years, DeHart has authored or co-authored eight publications on her study with four manuscripts under review. She has had five invited addresses and 137 conference presentations, most notably at meetings of the Association of Psychological Science and the Society for Research in Child Development. Four more presentations have been accepted for this spring and four others are under review.

Her most recent journal article is an observational study in the British Journal of Developmental Psychology, which documented that humor expressed between child sibling pairs is common but differs according to age and gender. Seven-year-old males, for example, produced more humor at that age than girls in the study.

The key role of students in research

DeHart says the study has been an invaluable student training ground, and several of those who worked with her on the project have earned doctorates leading to successful academic careers.

Among them is Beau Abar ’03, associate professor of emergency medicine at the University of Rochester Medical Center, who has joint appointments in the Departments of Psychiatry and Public Health Sciences.

“Working with Dr. DeHart largely changed my perception of what a college education was,” said Abar. “Before working in her lab, I was a good, if detached, student thinking that good grades would be sufficient to prepare me for post-graduate education and employment. I realized how wrong I was. She developed a team of engaged undergraduate students looking to solve actual research problems rather than simply answers questions on a test. I learned everything from study design to observational data collection to data analysis.”

Abar said the breadth of experience he attained working on the study helped him get into an excellent graduate school and, ultimately, achieve his goal of becoming a college professor.

Olivia Derella ’13, a doctoral student in clinical psychology at the University of Connecticut, says teamwork, time management, and perseverance were critical skills she learned at her first job as a research coordinator on DeHart’s study.

“I believe that Dr. DeHart sees so many students flourish under her guidance because she entrusts undergraduates with a high degree of responsibility,” said Derella. “Her patience and confidence in her students allow them to work through problems autonomously in a supportive setting where it’s okay to try new things and make mistakes. This kind of experience made me feel prepared to take on greater independence in my research when I began graduate school.”

Roughly 60 students are currently involved in the various aspects of the sibling/friend study.

“The key to managing a lab with so many student research assistants is to delegate and encourage students to assume responsibility for the study,” said DeHart.

“It’s fascinating to see the growth of adolescents and see how their childhood shapes their personality as adults,” said Ye, an aspiring physician assistant. “The experience is definitely aiding me in better understanding human behavior.”

The longitudinal study also has led to a series of cross-cultural studies. For several years, DeHart and her undergraduate students have been collecting data on 7-year-old Latinx, Caribbean-American, and Chinese-American children's sibling relationships and friendships. More recently, they have begun student-initiated interview studies with African immigrants and Chinese-American and Latinx college students on their sibling relationships, in collaboration with Nick Palumbo ’14, a University of Rochester Ph.D. student and interim director of leadership and service at Geneseo.

DeHart says the most important thing about the study is that it has given several hundred undergraduates the chance to be involved in a large research project, leading many of them to pursue research careers of their own.

“That's endlessly gratifying to me,” she said.