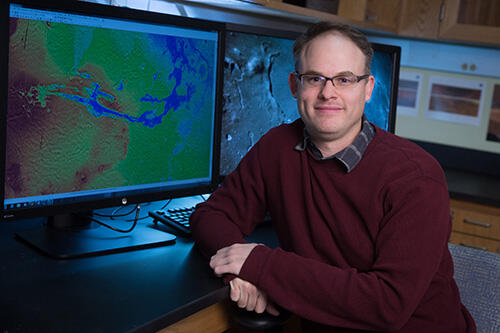 Nicholas Warner, assistant professor of geology, is among planetary geologists in California this week presenting evidence to NASA scientists on the best Mars landing sites for the next rover mission, scheduled to launch in 2020.

Scientists and engineers are studying eight different places on the red planet to decide where the Mars 2020 rover will explore, and Warner is presenting evidence in support of the Eberswalde Delta. Warner has been studying the site as part of a team of geologists analyzing data about the planet's surface gathered from satellites orbiting Mars and other rovers already there.

"It's quite exciting being part of the planning process for the next Mars mission," says Warner. "Our curiosity about space never wanes, and I enjoy lending my skills and expertise to advance our knowledge of the universe."

NASA will be downselecting to three or four possible sites this morning, which will be further evaluated and discussed.

Warner joined the Geneseo faculty in 2014. He spent three years as a post-doctoral fellow at NASA’s jet Propulsion Laboratory and has been part of planning groups for other recent Mars missions.

For more information on the Mars 2020 planning session, downloadable talks, and to watch a live stream of the meeting, visit the Mars 2020 landing site workshop website.

Correction note: this article originally stated that NASA would be announcing its landing site selection on the morning of February 10. This was corrected to reflect that the February 10 meeting will result in a downselection, not a final site selection.