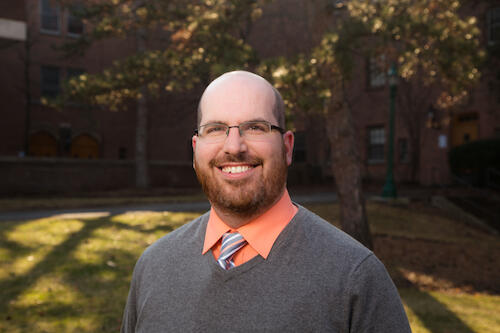 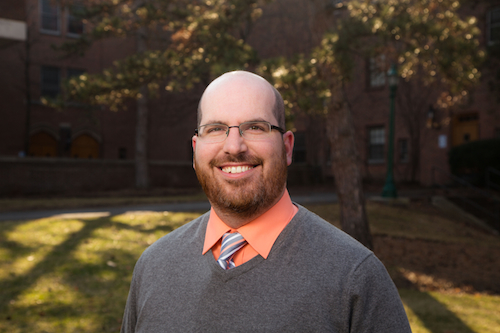 Ben Rawlins has been on the job as director of Milne Library for seven weeks but already, he’s noticed a marked difference between the private and public higher education sectors: the rules and regulations. Predictably, SUNY has more than he was accustomed to as director of library services at Georgetown College in Georgetown, Ky., where he previously served.

“The transition is going well, thanks to the help of the staff in the library and across campus who are always willing to answer any questions,” he said.

Rawlins emerged as the top candidate in a national search and began his duties at Geneseo Jan. 12. Since then, it’s been a whirlwind coming up to speed while he immediately focuses on three main priorities: integrating the SUNY Open Educational Resources (OER) Services initiative that was born out of OpenSUNY Textbooks into the curriculum; finalizing the library’s strategic plan; and continuing to look at ways that Milne Library can meet the needs of its users through ongoing evaluation and development of its resources, services and space.

Rawlins’ career path in library science actually began while he was traveling the road to history.

“I became attracted to the profession while working on my MA in history at Marshall University,” he said. “My initial plan was to get my masters and then work on a doctoral degree in history.”

But, in the words of Robert Burns, “the best-laid schemes of mice and men gang aft a-gley” — and go astray they did when Rawlins received a graduate assistantship at Marshall University’s Drinko Library.

“I really enjoyed working in the library and the interactions I had with the faculty, staff and students,” he recalled. “As a result, and with the encouragement and support of the librarians and my wife, I decided to pursue a career in library science. It has been very enriching and I have met some great people along the way. I wouldn’t trade it for anything.”

After completing his master’s in history at Marshall, Rawlins earned a master of science degree in library science from the University of Kentucky in Lexington. Following early career positions at Eastern Kentucky University and Kentucky State University, he joined Georgetown College, where, since 2011, he served as electronic resources and system administrator librarian, digital services librarian, assistant library director and digital services coordinator, and most recently, director of library services.

Along the way, Rawlins has been recognized with a number of honors and awards, including the 2016 Innovation Award from the Kentucky Library Association’s Special Libraries Section and the 2016 Georgetown College Rollie Graves Technology Award. In 2015, he was named a Bluegrass Higher Education Consortium Academic Leadership Academy Fellow.

Equally comfortable in the library and the classroom, Rawlins taught several courses while at Georgetown, including a Foundations class in the humanities, designed to equip students with foundational skills in academic inquiry, analysis, argument, critical thinking and discussion; Information Literacy, an introduction to information research skills; and Freshman Seminar, which afforded first-year students an opportunity to learn and practice methods helpful for college success.

“I was attracted to Geneseo because it is a public liberal arts college,” Rawlins said. “I am a firm believer in the value of a liberal arts education, being the product of one myself (bachelor of science degree in history, University of Rio Grande in Rio Grande, Ohio.) Another draw was the reputation that Milne Library has for being a place of innovation, with nationally recognized projects such as the IDS Project and OpenSUNY Textbooks. Not only that, but seeing how active the library staff are in the profession as a whole was impressive.”

Rawlins and his wife, Julia, live in Rochester. Outside of work, he enjoys hiking and traveling. He’s also a fan of John Muir and hopes to write a book about the naturalist one day. Rawlins enjoys reading historical fiction, mystery, thrillers and graphic novels.

“My favorite books are The Kite Runner by Khaled Hosseini and The Nightingale by Kristin Hannah,” he noted.