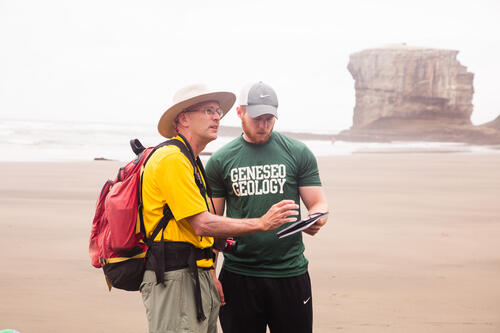 Department of Geological Sciences faculty member D. Jeffrey Over has been awarded the rank of Distinguished Professor by the SUNY Board of Trustees. Distinguished ranks are the highest honors awarded by SUNY.

In nominating him, President Denise A. Battles and faculty colleagues noted his outstanding research record, international reputation in his field, passion for mentoring students, and ability to integrate his research into his teaching.

“The most rewarding part of teaching has two parts,” Over says. “The small bits are seeing a concept take hold, an individual putting different information together, or just in sharing the wonders of geology. The long term is watching the development of students from novices to semi-confident experts in the field, and then seeing them become successful professionally or in life.”

Over has been teaching at Geneseo since 1991 and is the interim chair of the geology department. He spent last fall as a member of a research group at Masaryk University in Brno, Czech Republic, as a 2022–23 US Fulbright Scholar. Over’s team studied fundamental changes in Earth ecosystems, examining Devonian Carboniferous strata and microbialites (sedimentary rocks formed by bacteria and other microbes) that have relevance to modern global climate change. Over also team-taught a course on event stratigraphy and a seminar on extinction cycles and astrochronology.

The award submission recognizes Over’s body of work, “which has advanced knowledge of the interval of Devonian time some 360 million years ago that saw colonization of land by plants and vertebrate animals, including our distant ancestors, the world’s first forests, two episodes of mass extinction, and descent into an ice age.”

Over’s work has appeared in respected journals, including the Journal of Paleontology and the American Journal of Science.

Over has also successfully acquired more than $500,000 in support for research from external sources, including the National Science Foundation and the Petroleum Research Fund. Battles noted that he has used the support to advance his research and enrich the scholarship and research opportunities available to his colleagues and undergraduate students.