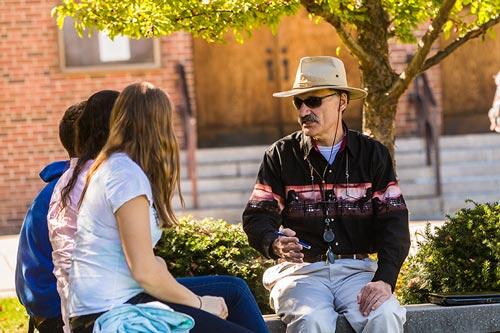 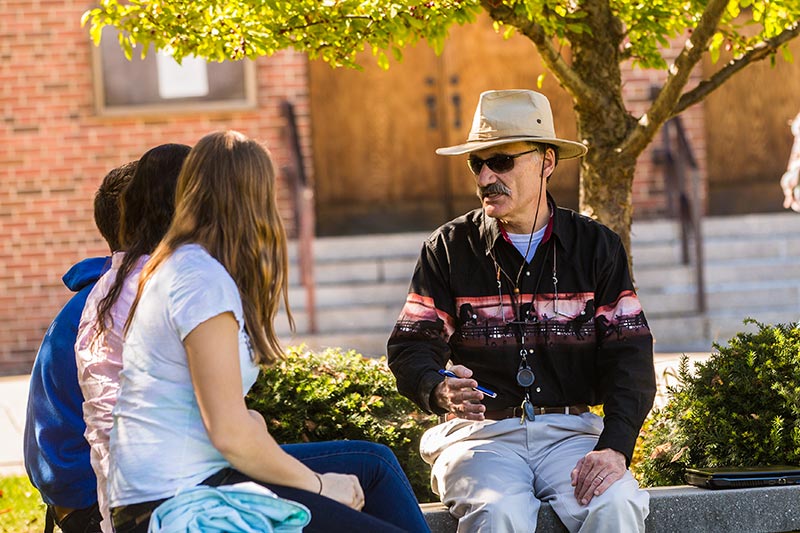 When it comes to building impressive resumes, Geneseo students aren’t the only ones pursuing excellence in their chosen fields. The college boasts a number of faculty who, year after year, are recognized by their academic and industry peers for making outstanding contributions in their areas of study. Their success serves as a model and inspiration for students, and supports Geneseo’s commitment to undergraduate teaching and research mentoring. Case in point:  SUNY Distinguished Professor of Physics Stephen Padalino, who was recently elected as a Fellow in the American Physical Society (APS).

The APS and its 51,000 members from academia, national laboratories and industry around the world strive to advance and diffuse the knowledge of physics through research journals, scientific meetings, education, outreach and advocacy.

Very few APS members are named for the honor: Only one half of 1 percent of APS membership is selected for Fellowship designation each year. Padalino was nominated in the Forum for Education for 30 years of “...outstanding leadership in physics undergraduate education connecting classroom learning with funded research opportunities and inspiring over 200 students to pursue careers in science.”

Padalino has a long history at Geneseo of being a devoted student mentor, and scientist. Every summer, he works full time to employ students and help them become involved with different research projects conducted either by himself or other physics faculty members. This laboratory research can be crucial for many students, as the hands-on experience can help inspire them and spark their interest more so than classwork.

One of Padalino’s former students, Brian Leeds DeMarco ‘96, was named an APS Fellow in 2015. DeMarco, a Geneseo Goldwater scholar, is a professor of physics at the University of Illinois at Urbana-Champaign.

As part of the nomination process, the nominator must write a recommendation letter for the nominee. Sean Regan, a senior scientist and APS Fellow with the Laboratory for Laser Energetics (LLE) at the University of Rochester, co-nominated Padalino for APS Fellowship after working with him at the laser lab with another LLE colleague, Craig Sangster. Padalino’s contributions to the LLE include using Geneseo’s particle accelerator to develop accurate and calibrated nuclear detectors that can be used for the laser lab.

Regan details many of Padalino’s achievements in the letter, including “...obtaining over $7M in funding from a variety of agencies for the sole purpose of undergraduate research opportunities in the fields of accelerator physics, inertial confinement fusion, and high energy density physics...” to name just a few. As he also noted, “The Physics and Astronomy Department at SUNY Geneseo under the research leadership of Professor Padalino is a national resource of exceptional physics students who pursue careers in physics. Many of Professor Padalino’s students have received advanced degrees in physics and are employed at national labs.”

Michael Campbell, deputy director of the LLE, shared similar praise.  “We at LLE were very happy to see Steve receive the APS Fellowship,” he said. “It is a great honor and well deserved. Steve and SUNY Geneseo have been a very important part of the success of LLE and the U of R in this area of physics and engineering. We look forward to more partnering in the future.”

In addition to the LLE, Padalino has collaborated with colleagues and students at the Ohio University Accelerator Lab, the University of South Florida Institute of Oceanography, the Lawrence Livermore National Laboratory, the Naval Research Laboratory, and the Massachusetts Institute of Technology, among others. In addition, he helped the GOW School for Dyslexia and Learning Disabilities with its startup physics program.

Padalino joined the Geneseo faculty in 1985; over the course of 31 years, his dedication and contributions have helped bring national acclaim to the physics department. For example, ranked according to the most recent data from the period 2012-2014, SUNY Geneseo is first among the 500 colleges in the nation with bachelor’s-only physics departments for producing the largest number of students graduating with a physics degree. During that span, Geneseo averaged 36 graduates each year, topping the second-leading institution, California Polytechnic State University, which has nearly four times the student population of Geneseo.

Throughout his career, Padalino has received numerous recognitions. Among his honors, he was named Professor of the Year for New York State in 2001 by the Council for the Advancement and Support of Education. In 2006, he was awarded both the SUNY Research Foundation Research and Scholarship Award and the Chancellor’s Award for Excellence in Research and Scholarship. SUNY also named him a Distinguished Teaching Professor in 2007.

“Dr. Padalino has proven himself an exceptional educator and a tireless researcher and servant to the field of physics and to society,” said President Denise A. Battles. “His work is marked by an extraordinary generosity of spirit. Whether it is mentoring and supporting junior colleagues through his funded research, including students in his professional presentations and publications, or simply teaching in an active and inclusive lab and classroom, Dr. Padalino consistently shares his spirit of discovery and his considerable expertise.”

DeMarco learned that first-hand after his sophomore year, when Padalino invited him to join a small group of students on his research team involving the college’s particle accelerator. “One of the most important things Steve did was to give students a lot of individual attention, and he made the research process fun,” DeMarco recalled. “Looking back, it was really incredible that he put together a research program like that involving students. I did research with him until I graduated, and Steve grew to become a very close mentor. That experience was instrumental for me to pursue a career in science. I’m a good example of the power of mentoring, because he really allowed me to thrive. In a different environment, I suspect my career would not have turned out to be what it is today.”

Recently, Padalino’s students visited the LLE to meet New York State Senator Charles Schumer and Dr. Ernest Moniz, U.S. Secretary of Energy, while another group of 18 students and three faculty traveled to the APS’ national meeting of the Division of Plasma Physics in San Jose, Cali., where they presented six posters during the five-day event.

“I am very pleased to be recognized by the APS as one of its newest fellows,” Padalino said. “It is a great honor indeed to be acknowledged by such an esteemed group. Many thanks to APS members Dr. Sean Regan and Craig Sangster from the Laboratory of Laser Energetics and Dr. John Mateja, president of the Goldwater Foundation, who nominated me and Geneseo’s President Dr. Denise Battles and Provost Dr. Carol Long, who put together an embarrassingly kind recommendation.”