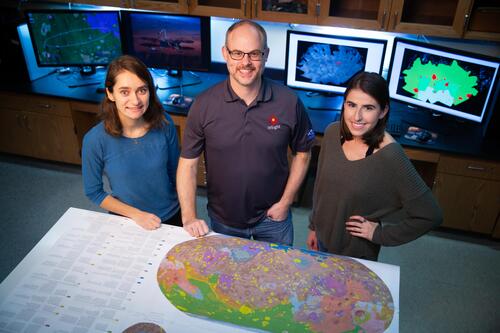 SUNY Geneseo geology majors Megan Kopp and Alyssa DeMott are about to embark on a journey that is, well, out of this world — in more ways than one.

Immediately after the landing, Warner, Kopp and DeMott will be intently working from three to four weeks to characterize the area around the lander and make recommendations to NASA engineers on where to place the sensitive geological instruments that will explore the crust, mantle and core of the planet. Warner is the geology lead on the Instrument Site Selection Working Group (ISSWG), which comprises him, his team of students and other geologists.

InSight will be the first mission to use a robotic arm to deploy instruments onto the surface of a planet independent of the lander, underscoring the critical importance of the work the ISSWG will be doing to ensure the mission’s success. Humans have done such deployments during the Apollo missions, but a robotic deployment has never been done.

“This is the most amazing opportunity I’ve ever had, and I’m really excited to be involved,” said DeMott. “When I took my remote sensing and geomorphology classes, I had no idea that my mapping software skills would be applied to working with NASA.”

In selecting students to work with him on InSight’s post-landing phase, Warner chose those who did well in his courses and were skilled with GIS (Geographic Information System), the powerful software geological scientists use to analyze imagery and to map the surface of Earth and other planets.

“Megan, Alyssa and I are the primary individuals on the ISSWG who are trained to use GIS and that’s one of the reasons why I’m leading this effort,” said Warner.

To ascertain the best area for placement, Warner said they will map the area, count and measure rocks that could be impediments, and analyze slopes, among other tasks.

InSight scientists will be conducting three large geophysical experiments. They will place a very sensitive seismometer onto the surface to measure “Mars quakes” to help determine the interior structure and composition of the planet.

“The nature of the seismic shock waves detected by the seismometer after a Mars quake will help us determine, for example, whether the core is solid or liquid or maybe partly solid and partly liquid,” said Warner. “Those outcomes also will provide information about other planets in our solar system.”

A second experiment will involve drilling into the ground about five meters to measure the temperature of the heat radiating from the core. Warner said that will reveal how a planet cools over time and whether Mars is still geologically dynamic.

The third experiment will measure the rotation rate of Mars by using a radio tracking antenna on the lander.

“This will tell us if and how much the planet is wobbling and will also help reveal whether the core is solid or liquid,” said Warner.

Kopp and DeMott aren’t the first students to work with Warner on the InSight project. Geneseo geology students Julianne Sweeney ’16, Anne Kelly ’17 and Tony Pivarunas ’15 also worked on the mission.

“I’m very fortunate to have research experience leading to working on a NASA space mission,” said Kopp. “It’s a once-in-a-lifetime experience. It feels like I’m living a six-year-old’s dream.”

NASA approved the mission shortly after Warner started a post-doctoral fellowship at JPL in 2012, and the director of his fellowship, Matt Golembek, employed Warner to help identify and characterize InSight’s landing sites. Warner joined the Geneseo faculty in 2014 and has continued his planetary research on the mission from his campus lab while teaching and involving some Geneseo students with the project.

InSight is a NASA discovery-class mission — one with a singular scientific purpose — to understand the planet’s interior structure. Previous Mars rover and lander missions focused primarily on describing the surface geology of the planet. They sought evidence that Mars was once habitable for life. The next launch to Mars, scheduled in 2020, will be another mission that will deploy a rover on a life-seeking journey.

Because of InSight’s internally-focused objective, Warner said that the landing site selection process for the mission didn’t involve the larger scientific community because “we just want to land on a parking lot, a safe, flat place to conduct our experiments.”

A secondary science objective of the InSight mission that Warner and his associates will begin via InSight is composing a regional geological map of the landing site, to characterize the area around the lander. Warner recently received a four-year NASA grant to begin this phase of the project using imagery from InSight. He will continue to involve Geneseo students in this research.

“This kind of mapping has been the primary geological objective in past missions, but the geophysical experiments — seismology, heat flow and rotation — are taking priority on this mission after our geology team makes recommendations on where to place the instruments,” said Warner.

DeMott and Kopp will be the only undergraduate students involved in analyzing the best areas for InSight’s instrument deployment, other than NASA interns. Both are receiving credit as a directed study under Warner.

“The geology department has given me opportunities that I would never have had otherwise, including this kind of research,” said Kopp. “The bonds the geology faculty make with students are strong. They are genuinely interested in giving us research opportunities if we want them.”

Kopp, who is completing a second major in childhood/special education, plans to integrate her science and education background. “I want to teach elementary education next semester and then will look into geoscience grad school for geoscience education,” she said.

DeMott plans to continue working with Warner on the Mars regional mapping project through the NASA grant. “The Geneseo research opportunities are awesome,” said DeMott. “I will be looking at grad school for planetary geology or geomorphology in the future. I hope my GIS skills will help me get accepted into a graduate program.”

For Warner, his work on planetary geology never gets old. He says there is something new and exciting about each mission. “I’ve been working on Mars projects for a long time,” he said. “It’s a climax of any planetary geologist’s career to work on a mission. It’s a lot of work, that’s for sure, but the rewards for new knowledge are unequaled.”