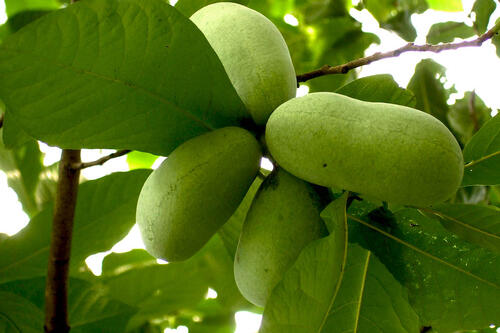 Despite its tropical-sounding name and exotic-tasting fruit—described as a mix of banana and mango flavors with a hint of pineapple—the American pawpaw tree grows as far north as Ontario, Canada. And yet, the species is considered extremely rare in New York State, with only 20 known locations, virtually all in Western New York (WNY).

In a recent article in Plant Ecology, Associate Professor Stephen Tulowiecki, a geographer at SUNY Geneseo, studied the ecological conditions that pawpaws favor in WNY. He developed a model to predict hidden locations where pawpaws may grow and identify areas that might sustain newly introduced trees.

“There are many ecological and perhaps economic reasons to be interested in pawpaw,” Tulowiecki says. “Conserving rare species is important for biodiversity. Protecting pawpaws has impacts on other species. For example, there’s a butterfly—the zebra swallowtail—whose larva consumes only pawpaw leaves.”

Interest has been growing in the pawpaw as a commercial tree species, too. Pawpaws produce the largest edible fruit of all native tree species in the United States—each custardy fruit can weigh up to a pound. “I think with renewed interest in farmers markets, localism, CSAs, and local cuisine, more people are paying attention to pawpaw,” Tulowiecki says. While the focus of his study was to understand pawpaw distribution in WNY, to predict locations with undiscovered pawpaws, and to assess its level of protection, his models can also predict areas that might be suitable for successful commercial growing of the fruit.

“Pawpaw is quite rare in NYS—earning it a threatened-species designation,” Tulowiecki says. “One of the problems associated with modeling the distribution of any rare plant species is that there are few known sites from which to understand the relationship between its distribution and environmental conditions.”

To work around this constraint, Tulowiecki used an ensemble of small models (ESM) approach, devised for rare species distributions, that averages predictions together from individual models at each location in WNY to understand—for this study—where the highest-predicted suitable habitat in the region is. He then examined whether those areas predicted to be suitable are protected or not.

Tulowiecki’s modeling suggests that the three most important variables in shaping pawpaw distribution are climate, soil acidity, and soil depth. Pawpaw is found in the warmest areas of WNY and on mildly acidic, deep soils.

The study’s findings suggest that locations predicted to be suitable for pawpaw are overwhelmingly found on deforested lands and private lands that are unprotected. The implications are that WNY is at risk of losing pawpaws due to land-use decisions on private lands, and also that deforestation may have impacted pawpaw numbers. Ecologists and conservationists can use this knowledge to help guide any future efforts to reintroduce and protect the pawpaw in NYS.