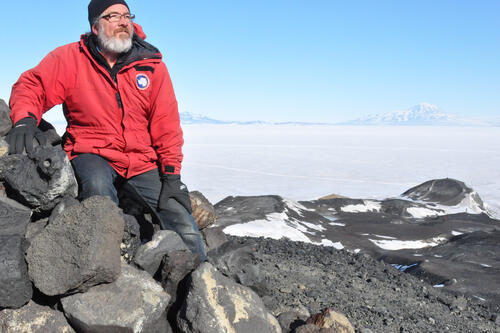 This story originally appeared in the Geneseo Scene alumni magazine. Read it and view Glenn McClure's photo gallery from Antarctica.

And with the noises as a backdrop, Glenn McClure ’86/MS.S.Ed ’11— composer, musician, humanities teacher, and adjunct lecturer in Geneseo’s English Department — talks of sounds and silence, thousands of miles away in Antarctica.

“It’s a noisy place, a really noisy place,” he says of the icy continent where he conducted research at the end of 2016.

The ice moving, the wind, the helicopters, people shifting their weight on the dry-as-dust snow, all made sounds that blotted out conversations.

“It took a long time for those of us who hadn’t been there before to learn how to stand still,” says McClure. “That’s another one of the metaphors of the place. That it’s hard for us to hear each other here when we’re shouting at each other. It takes being quiet and still to listen better.”

And so he stays still, and listens, and talks in a quiet, steady and soothing voice — a voice that itself is a kind of triumph over a stutter he has that can strangle his words. He takes all that he hears, the data points of life, the silent secrets of science, and converts them into music.

“I seek the hidden voices in the ice, in scientific data, in other things,” he says, “to try to give voice to those things that are otherwise silent.”

The trip to Antarctica was a journey of a lifetime for McClure — and it aligned with his goals as a musician, composer, professor and advocate for integrating the arts and science.

He worked closely with researchers, experts on sound, seals and snow. Antarctica is their laboratory. They welcomed McClure so he could tell their story, and make composition out of it, and inspire young students. McClure recently won the SUNY Chancellor's Award for Excellence in Adjunct Teaching.

“The scientists were really excited about having artists who were willing to come down and not only share their experience but also to be a voice for either their work specifically or Antarctica in general, to let folks know what’s going on down there,” he says. “It’s a hard thing to describe in a sound bite, and it takes the ability for someone to hold someone’s attention for a longer period of time, that’s what artists do. They hold people’s attention.”

McClure received a highly competitive travel grant from the Polar Division of the National Science Foundation for the project. It is one of a handful of stipends that go to artists, writers and musicians each year to do research on the frozen continent and observe scientists at work.

McClure, spent 40 days in Antarctica based at McMurdo Station on Ross Island with this mission: to harvest the sounds that he’ll use to create music through a process called sonification, a method that’s part mathematical and part inspiration.

Essentially, sounds from nature — for example, the frequency and intensity of the movement of the Antarctic ice — are recorded and then converted into data points on graphs. Those points can then be translated into musical notes. McClure then uses these notes as the inspiration for melodies.

“My job as a composer is to take that raw material and transform it into something that is meaningful to a particular audience,” McClure says. “I seek the hidden voices in the ice, in scientific data, in other things, to try to give voice to those things that are otherwise silent.”

McClure used the same process when he was commissioned by the European Space Agency to produce a choral arrangement using data obtained by the agency’s Rosetta probe that flew past Mars. It then landed on a comet sending back information until its batteries died. McClure’s composition was first performed in Germany in 2015 by the space agency chorus, to celebrate the probe’s landing.

For the Antarctica project, McClure worked with Peter Bromirski and his associates from the University of California San Diego’s Scripps Institution of Oceanography. The team employs seismic sensors on the Ross Ice Shelf to better understand the Antarctic melting process and the viability of the shelf. McClure often flew out from the McMurdo base, by plane or helicopter, to visit other parts of Antarctica. He also crossed the international dateline to spend 10 days at the spot on the Ross Ice Shelf known as Camp Yesterday. (Don’t think that McClure will ignore the poetic possibilities of that name.)

To gather data, McClure went beneath the ice in a diving bell to record the sonar-like sounds of the seals. He also helped the researchers as they retrieved recording devices that had spent two years buried in snow to capture, among other noises, the sound made by the shifting ice.

It was hard, frigid and windy work, and it demanded a one-for-all, all-for-one ethic that broke down all barriers between the scientists and the artists. “The divisions between these bodies of knowledge and experience are easy to argue when we feel comfortable,” McClure says. “The cold makes many of those arguments sound empty.”

Bringing Antarctica into the classroom

As McClure creates music and tells the Antarctica science story, he is also collaborating with regional educators and performers to bring compositions to life — and integrating lessons in the classroom.

This year, McClure worked with Randy French ’83, a science teacher at Geneseo Central School, and his seventh-grade students to convert some of the data from Antarctic into musical notes. Chris Minges, who teaches music at the school, took part in the project.

Inspired by the notes the students had discovered in the science, McClure then created a composition called “Dive of the Seals” that students performed at Geneseo Central in April.

"Glenn is creative in his ability to take something normally considered not musical like science data and to both turn the data into musical representation, and to make the process understandable to students,” says French, who also went to Antarctica last year on an expedition different from McClure’s journey.

As part of his continuing Antarctic project, McClure is adding lyrics to the melodies that have emerged from the data. In part, he plans to use fragments from the memoirs of Ernest Shackleton (1874-1922), who led three expeditions to the Antarctic.

Shackleton’s writing was generally dry, but there were flashes of poetic prose, McClure says. At one point, the explorer writes, “We had seen God in his splendors, heard the text that Nature renders.” He and McClure seem to be on the same page.

At the college, the Geneseo Chamber Singers will perform one of McClure’s Antarctic chorale pieces this in October, under the direction of Professor of Music Gerard Floriano ’84.

Floriano and McClure met when they were both undergraduates at Geneseo, and Floriano has directed performances of McClure’s earlier compositions. “Glenn is a talented and versatile composer,” Floriano says, noting that McClure’s translation of the Antarctic sounds should be “interesting and fun.”

Though he takes inspiration from science, McClure makes it clear that he’s not a scientist, and he is grateful for the technical help he’s had along that the way, including a significant assist from Kirk M. Anne of the college’s Computing & Information Technology Department, who helped McClure process the Antarctic data.

Finding his voice — through science

His work with, and on behalf of, scientists has special meaning for McClure. Scientists — including professors at Geneseo — have helped him find his own voice.

They taught him to overcome a severe stutter that developed almost as soon as he began to speak as a child and has been with him since, with one important exception. “The only time I could open my mouth without the physical distress and the emotional baggage and the social difficulties of the disability was when I sang,” McClure says.

“There is something about what happens with music that circumnavigates the parts of the brain in which this disability lies. Music was the only thing that made me feel powerful and beautiful as a kid. Music was more than just something that sounds nice. Music was the mechanism for me to overcome the disability.”

He grew up near Geneseo, and at 11, he attended the six-week summer clinic run by the college for stutterers directed by Harold Starbuck, a professor of speech pathology and expert in stuttering.

Such collaboration stands out to his former professors, and now colleagues; such interdisciplinary projects and teaching is a core at Geneseo.

“When he was a student at Geneseo, Glenn had an unusual ability to see connections and to synthesize,” says Ron Herzman, a Distinguished Teaching Professor of English, who was first McClure’s teacher and later his colleague when they co-taught humanities. “Thirty years later, after many experiences watching him perform and teach, and conduct, I marvel at how this interdisciplinary approach has become the cornerstone of a truly unique career. Performer, composer, conductor, lecturer, humanities tTeacher — all these roles and more are somehow connected and integrated as though it were absolutely natural. And to for Glenn, it is.”

In addition to his varied courses at Geneseo, McClure is an adjunct professor of composition at the Eastman School of Music, a professor at Paul Smiths College, and he has worked extensively with students in public schools. His compositions have been performed widely, including by the space agency, and in Carnegie Hall, Lincoln Center, Italy and Mexico City.

He’s busy. But McClure emphasizes that his time in Antarctica gave him a lesson in the need to slow down, the need to care for himself and for others.

This kind of vigilance was necessary in Antarctica, in part because it’s one of the driest places on the planet. The dry conditions raise the risk of dehydration. Consequently, people are assigned, on a rotating basis, to watch each other every half hour for any signs of dehydration.

“On the first day when the check-in person would ask me this every half hour, I was a little put off,” McClure says. “But by the time I was out there for two or three days, and I realized how dangerous the place is, I looked forward to every check-in because here’s a person who’s caring for me, whose job is to make sure I stay alive. The dangers of the place remind us of the needs for us to care for each other and to care for the planet in a very direct and earnest way.”

Thus, one of McClure’s many takeaways from Antarctica is to try and maintain what might be called an “Antarctic state of mind” — an attitude he hopes to impart to his students.

And as the students and townspeople in the bakery talk of tests, and the winter that was, and the summer to come, McClure pulls out his laptop, shows picture of Antarctica. There he is, bundled up, kneeling, his ear to the ice. He listens to the sounds. The ice shifting, the snow crunching ... the stuff of science, the stuff of music ... the stuff of Glenn McClure’s life.