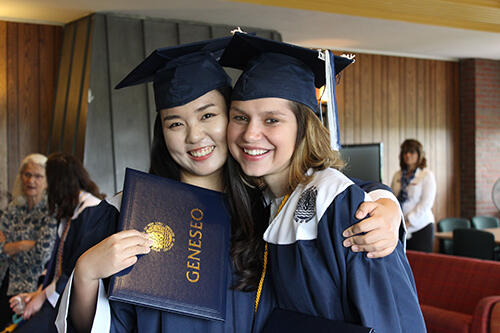 Emily Rogers ’17 knows how it feels to be in a new country, with limited language skills. Her time vacationing in Italy wasn’t always easy.

“I felt isolated — I couldn’t fully express myself," says Rogers. "I began to fully understand the impact of communication.”

That’s why she joined the Speech Buddies program, in which she helped SoJin Lee ’17, of South Korea, bridge the gap.

In the program, American-born student volunteers meet weekly with an assigned buddy to tutor them on English skills like grammar and pronunciation, as well as American culture, including slang and how to speak to professors.

“I developed a great friendship with SoJin,” says Rogers, “and I learned so much also about South Korean culture.”

That’s the point, says Irene Belyakov-Goodman, lecturer of English and coordinator of English as a Second Language at Geneseo: “They are not just teachers, they are friends, who are also well-trained tutors. They teach each other about the world.”

Belyakov-Goodman started the program in 2002 after students in her English as a second language classes told her they felt lonely and had a hard time making friends. She saw a natural connection between what students in her Communicative Disorders and Sciences class on articulation and phonological intervention were learning— and their ability to be casual, personal resources for navigating American lexicon and culture.

Speech Buddies was a class component but soon became its own class: Methods of Teaching English to Speakers of Other Languages.

Some 55 students per semester who have English as a second language and international students sign up for a buddy. There are at least 25 buddy volunteers, who are taking or have completed the methods class.

American-born buddies have just a few requirements. They must be interested in international connections, culturally curious and able to work independently. They also must have some foreign language experience, says Belyakov-Goodman, “so they know what it feels like to learn a language.”

Partners get more practice playing board games, eating pot luck dinners and doing other activities in the English Language Immersion Club that was initiated by Matt McClure ’16.

The need will continue to grow, says Belyakov-Goodman: There were 130 international students at Geneseo in 2016-2017.

Speech Buddies can enhance the experience, and make connections across cultures.

“The program helped me to overcome being afraid about making friends,” says Lee.