Study Looks at Impact of Native American Land Use on Forests 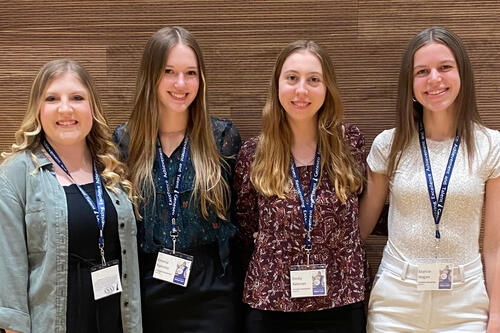 In a new article published in the Journal of Biogeography, SUNY Geneseo geographer Associate Professor Stephen Tulowiecki and four undergraduate researchers in the Department of Geography and Sustainability Studies examined the influence of Native American land use on the composition of historic forests in the Northeastern United States. The team found that Native American settlements and land use had a lesser effect on the distribution of tree species across the region when compared to climate and soil conditions.

Tulowiecki explains there are competing narratives regarding the impact of past Native American land use on forests before the Euro-American settlement. "One mythology is that North America was unspoiled, virgin wilderness—the 'forest primeval' myth," he says. "But in the past 30 years or so, the pendulum may have swung too far in the opposite direction, suggesting that there was little untouched landscape." Tulowiecki's article "Localized Native American impacts on past forest composition across a regional extent in the northeastern United States" provides evidence of a middle ground.

Tulowiecki and his team of student researchers utilized predictive modeling to assess the impact of Native American land use based on settlement locations (1500–1800 CE) in the area that is now Maine to the southern borders of Pennsylvania and New Jersey, versus environmental variables such as climate and soil conditions. Original land survey records (1650–1850 CE) provided early tallies of the abundance of tree species across the Northeastern US just after Native American dispossession of the land, which served as data to compare with settlement sites, climate, and soil variables in their models.

Tulowiecki says that researchers have worked to answer similar questions about the impact of Native American land use and management by looking at accounts from explorers and early settlers and pollen and charcoal evidence from lake sediment records, for example. His use of original land surveys is a valuable ecological source, Since surveyors recorded tree species and details about the landscape and broader environment at the brink of European-American settlement.

The findings suggest that across the regional extent of the northeastern United States, Native American land use had a subtle and localized role in shaping relative abundance patterns of tree species. "It's within 10 to 20 miles of settlements that we see an effect," Tulowiecki says. "Our findings support assertions that climate and soil—especially mean temperature and soil acidity—were the major drivers of vegetation patterns historically." However, the team found a slight increase in fire-tolerant and nut-producing trees like oak and hickory near settlements potentially due to controlled burning, as well as an increase in trees that thrive in more disturbed environments like ash.

"It's important to look at studies like this when making decisions about land management," Tulowiecki says. "Do we want to manage lands for carbon sequestration to focus on climate change, or do we want to follow traditional land management practices of Indigenous peoples? In some cases, fire is good because it maintains rare ecosystems and plants. Some species of fire-dependent plants are currently threatened because we've suppressed fire in the east."