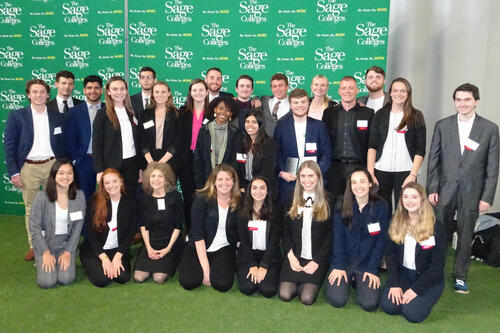 The Ponic Hops team received a $1000 prize as the 3rd place winner in the AgTech & Food category. The team also won the award for the best Concept Stage company. The team hopes to support New York State’s craft brewery industry by extending the hops growing season and increasing the unique hop varieties that can be cultivated in the state via an indoor hybrid-ponic growing system. The Ponic Hops team includes New Yorkers Rebecca Hoppy ’19 from East Aurora, Jeff Calderon ’19 from Getzville, Dillon Szmala ’19 from Medford, and Mary Higgins ’20 from Little Neck.

The Zalara team also received a $500 prize as the Concept Stage winner in the Energy & Environment category. Zalara is a collaboration with RIT and is promoting a wastewater pre-treatment product, GreenWall, to be used by craft breweries and wineries. The wall, containing porous material and plants, is capable of filtering out high levels of organic material from brewery wastewater prior to its disposal to septic or municipal water treatment facilities. Student team members from New York are Auste Norvila ’20 and Hilda Gomez ’19, both from Brooklyn; Alis Urena ’19 from the Bronx; Megan Avenia ’19 from Ghent; Harrison Harmon ’19 from Dobbs Ferry; and RIT student Walter Dylag ‘19.

The competition, which included both public and private institutions, resulted in no school earning more than one first-place award.  SUNY Geneseo along with Syracuse University topped the pack with a total of three awards each, beating out Clarkson, Cornell, Rensselaer Polytechnic Institute, the University at Buffalo, and the University of Rochester which each earned two awards.

“I couldn’t be more proud of these Geneseo students.  I thought each team demonstrated true undergraduate excellence” said Judy Albers, the Charles L. “Bud” VanArsdale Endowed Chair for Entrepreneurship at Geneseo. “Our teams were facing stiff competition from much larger research universities and sometimes from much older graduate and non-traditional student teams.  But we were highly prepared and focused and our students effectively communicated their business cases to the judges.”

All six of this year’s VentureWorks teams were selected as semi-finalists to compete in the Finger Lakes Regionals of the NYBPC on April 10 at the University of Rochester. At that event, five teams were selected as finalists, and the sixth team was invited to present to SUNY Research Foundation in Albany on the day of the finals.

Other VentureWorks finalists and their products competing this year were ZubAir, a flight data tracker for transmitting plane data in real time; Biota Foods, a nutrition bar that supports a healthy microbiome; and ArkAngel, emergency readiness tools for campus EHS (emergency, health and safety) managers and near-campus first responders. Members of the Vionyx team, a company that aims to use ionic wind technology to power lightweight drones, presented to SUNY Research Foundation.

“Student entrepreneurship is a point of pride and focus at SUNY, and the winning teams are evidence of the innovation that exists on our campuses,” said SUNY Chancellor Kristina Johnson. “I look forward to seeing the companies that will emerge from the 2019 NYBPC competition and applaud all the participants for their hard work.”

The NYBPC is New York’s premier collegiate regional and statewide business plan competition. The event was established to encourage innovation and entrepreneurship throughout New York’s colleges and universities. Since 2010, more than 2,500 students have participated in the NYBPC, and more than 100 businesses have been launched. The NYBPC has provided more than $1 million in seed money for the winning companies, which yielded more than $20 million in venture capital investments in additional funding.