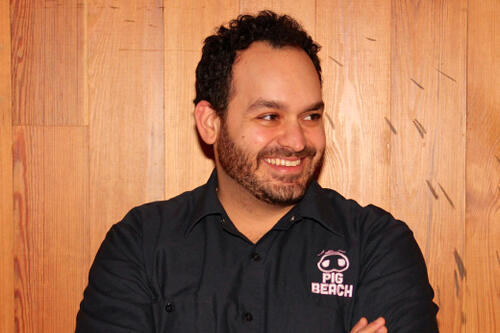 You can almost taste the flavors when Matt Abdoo ’02 talks about his grandmother’s cooking.

“Whether it was a pot of gravy with meatballs and braciole and sausage, or a pork shoulder that’s painstakingly cooked for 12 hours, or Sunday sauce, made low and slow—the ultimate goal was to cook a beautiful dinner and bring everybody together to eat it,” Abdoo says.

Nourishing people with good meals and shared experiences has always lived at the heart of Abdoo’s passion for cooking. An award-winning chef and restaurant owner, his credentials are solid: top of his class at the Culinary Institute of America, chef di cuisine at Del Posto, a New York Times four-star restaurant. Part of fine dining’s inner circle, Abdoo traveled the world with Mario Batali, cooked for high-end celebrity events, and built a name for himself among food aficionados.

The work delighted him, Abdoo says, but the rarified nature of the restaurants didn’t square with his notion of a meal, especially when friends couldn’t easily afford to eat the food he prepared. “One can theoretically be just full and just as happy having a Big Mac and fries as sitting down for a 3½-hour meal with 12 courses,” he explains.

Arguably at the top of his field but inarguably ready for a new direction, Abdoo walked away from fine dining.

And landed in the world of cooking with fire and smoke. Along with his business partner and barbeque competition teammate, Abdoo opened the critically acclaimed Pig Beach BBQ in 2015, finding his way back to “the food and the family and the love aspects of cooking without that massive price tag.”

Located in the Gowanus neighborhood of Brooklyn, Pig Beach BBQ has large outdoor spaces and family-friendly picnic tables that conjure a big summer block party atmosphere. The patrons evolve throughout the day, Abdoo says, with young families in the “stroller mafia” romping through the early afternoon, foodies dining in the evening, and 20-, 30-, and 40-somethings eating, drinking, and partying into the wee hours.

That nondiscriminatory nature to barbeque gratifies Abdoo and feeds his view of dining as a means of building community. “Everyone of all demographics, of all ethnicities, can appreciate it. It’s a cuisine that’s affordable, it’s fun, it’s fast, and it brings all diversities together in a way that many other cuisines won’t.”

The power in a plateful of spicy, sticky barbeque may be undeniable, but what Abdoo believes in most deeply is the simple, loving act of sharing a meal.

“In the face of so much uncertainty, the one thing that can bring people together and put smiles on their faces is the love of food and family,” he says. “It’s more important now than ever to have those moments when you can cherish your family and friends and embrace a good meal together. And that’s why I do what I do.”