Join in celebrating your peers and our community partners who have made a difference in our community through service and volunteerism. 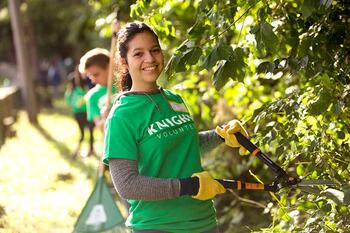 The Volunteer and Service Awards recognize students, faculty and staff, student organizations, and community partner organizations for service work that has had a positive impact on the people and institutions across our community. The awards will be announced during the Leadership Recognition and Awards Ceremony being held on Wednesday, May 4 from 2:30 - 3:45 in the MacVittie College Union Ballroom.

The deadline to submit a nomination is Wed., April 20 at 11:59 PM. Self nominations are accepted.

Nominations are currently being accepted for the following categories:

INDIVIDUAL STUDENT NOMINATION: This award is to recognize any individual student who has actively engaged in high quality service to our community.

STUDENT GROUP / ORGANIZATION NOMINATION: This award is to recognize the collective efforts of a student club, fraternity / sorority, sports team, or any group on campus which over the course of the 2021-22 academic year has actively engaged in high quality service to our community.

FACULTY / STAFF NOMINATION: This award is to recognize the work and efforts of a faculty or staff member who has engaged in service and / or supported students and / or community members in service and volunteerism in our community.

COMMUNITY ORGANIZATION: This award is to recognize the work and efforts of an off campus community organization or institution that provides opportunities for our students and other community members to serve and volunteer.

Criteria for reviewing nominations is based on:

The scope and purpose of services / supports provided. Does the service address a need in our community?

The positive impact their service / supports have had on the campus and broader community. Has there been
a practical or measurable change or improvement over the course of the year?

The educational and experiential impact. In what ways have members of our community been able to learn
and grow personally and / or professionally as a result of this service?

Please direct any questions to vc@geneseo.edu