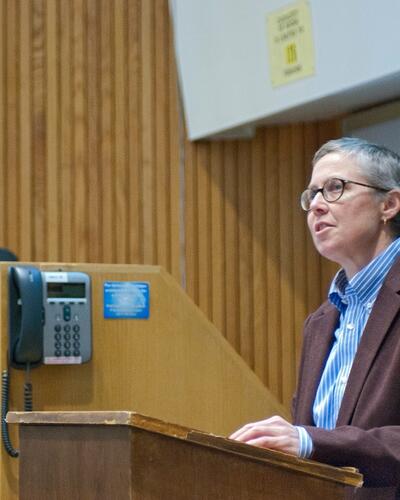 Emilye Crosby has been a member of the Geneseo faculty since 1995. Prof. Crosby studies and teaches African-American history and the modern Civil Rights Movement. She has received numerous awards--for her teaching, scholarship, and service. These include the Chancellor's Award for Teaching, the Harter Mentoring Award, the Chancellor's Award for Excellence in Faculty Service, and the President's Award for Research and Creativity. Her first book, A Little Taste of Freedom, won the McLemore Prize and was awarded an honorable mention for the Organization of American Historians' Liberty Legacy Prize.

Dr. Emilye Crosby has been a member of SUNY Geneseo's History Department since 1995 and was the coordinator of the Black Studies/Africana program from fall 2002 through Spring 2018.  She has written A Little Taste of Freedom: The Black Freedom Struggle in Claiborne County, Mississippi and edited Civil Rights History from the Ground Up: Local Struggles, a National Movement.  Dr. Crosby is also the coordinator of SUNY Geneseo's annual Martin Luther King, Jr. Commemoration.  She teaches a wide range of history, general education, and interdisciplinary courses, with a particular interest in the Civil Rights Movement, African American history, and women's history.

Essays and Interviews in Civil Rights History from the Ground Up