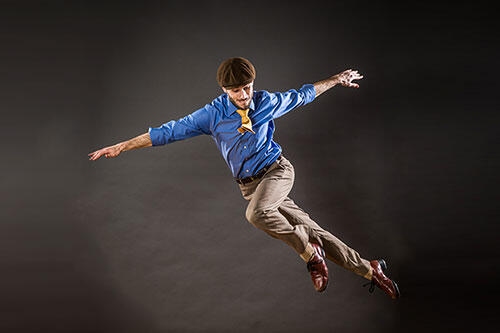 Tap dancer Alex MacDonald '08 has performed, taught and studied all over the world.

On stage, Alex MacDonald ’08 is a musician. His sliding, thumping and stepping feet are instruments. His free-flow tap is rooted in improvisation, complementing the notes, not choreographed for them.

“It’s storytelling,” says MacDonald. “We are the percussion.”

Improvising on stage, he says, “is an act of dialogue. Like with any language, there is an exchange of ideas using a common vocabulary and syntax. ... This is the space I feel most free.”

This energy is what inspired MacDonald’s path to professional tap dancer — performing, researching and teaching all over the world.

He has been dancing since he was 3. He was just 6 when he was hooked by tap master Gregory Hines’ fluid moves while watching him perform in a film.

At Geneseo, MacDonald was an English major before he “stopped kidding” himself and switched to musical theater with a minor in dance. He studied all facets of the industry, from theory, history and composition to performing and directing. He was a member of the Chamber Singers, the Dance Ensemble, and improvised tap compositions with jazz musicians on campus.

“I came to understand the etiquette of being a performer,” says MacDonald, “and the trust involved in working with other people, as well as how to take direction, how to take risks, and be willing to go to vulnerable places artistically.”

After graduation, MacDonald went to New York City to make his way as a performer. He attended a memorial for improvisation tap legend Jimmy Slyde. Slyde’s friends recounted Jimmy’s flair, and his teaching; he was a “nudger,” who inspired people to be better.

“I didn’t realize what I was going to see was the inner-most circle of tap dancers — all of these people I admired, sharing memories,” remembers MacDonald. “There was this energy in the room that hit me, more than anything that was being said. I knew this is what I wanted to pursue.”

MacDonald won a spot in the renowned Cats Paying Dues, directed by Andrew Nemr, a protégé of Hines, his childhood idol.

MacDonald has since performed throughout North America, Europe, Southeast Asia and the Pacific as a tap soloist and tap choreographer for Scott Bradlee’s Postmodern Jukebox, a musical and dance troupe that brings contemporary hits to life with a vintage flair.

He’s also the hype man “Jumpsuit Alex” for Grammy-winning children’s musicians Tim and the Space Cadets. In 2012, as a Fulbright scholar, he earned a master’s degree in ethnochoreology at the University of Limerick. He also gave a TEDx Fulbright Dublin talk, about “Oral Tradition in the Age of Smart Phones.”

“Tap is physically, intellectually and emotionally thrilling. I love being around other tap dancers because they are curious, open-minded, and relentless in their pursuit of rhythmic frontiers,” he says. “I’m grateful that I’m doing what I love.”

MacDonald also now “nudges” his own students in the craft.

He has taught at the Edge School of the Arts, the Irish World Academy of Music in Limerick in Ireland, and Steps on Broadway. Last summer, he taught in New York City at Ailey Camp, through the Alvin Ailey Dance Foundation, which introduces youth in underserved communities to dance.

“It’s about giving them an outlet and a stronger sense of self,” says MacDonald. “I can touch people’s lives.”