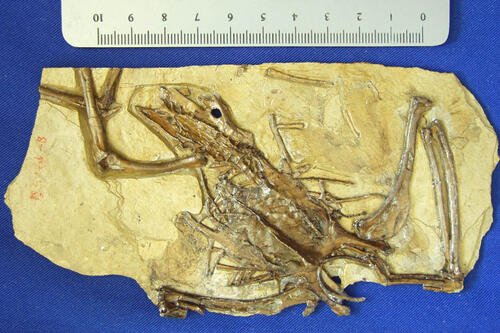 Paleontologist Matthew Lamanna, Ph.D., the principal dinosaur researcher at Carnegie Museum of Natural History, will deliver the sixteenth annual American Rock Salt Lecture in Geology on Thursday, April 25 at 7:30 p.m. in Newton Hall Room 202, on the SUNY Geneseo Campus. Lamanna’s talk, “The Origin of Modern Birds: New Cretaceous Fossil Discoveries from China and Antarctica,” is free and open to the public.

Expeditions led by Lamanna and his colleagues have uncovered dozens of exquisitely-preserved avian fossils, many of them including soft-tissues such as feathers and skin from 120 million-year-old lake sediments in the Changma Basin of northwestern Gansu Province, China. More recently, Lamanna and a group of collaborators have conducted expeditions to latest Cretaceous exposures in the James Ross Basin of the Antarctic Peninsula in search of what may be the world’s most ancient neornithines. For his talk, Lamanna will chronicle his teams’ discoveries of Chinese and Antarctic Cretaceous fossils and their implications for the rise of modern birds.

"Matt Lamanna is living the dream of every child — finding and studying dinosaurs, living and dead,” said Jeffrey Over, professor of geological sciences at SUNY Geneseo. “We are delighted to have him visit Geneseo and share his findings that are relevant to classes and faculty in Geology and Biology."

As the associate curator of vertebrate paleontology at Carnegie Museum of Natural history, Lamanna helps to oversee one of the world’s largest dinosaur collections. Lamanna served as lead scientific advisor for the museum’s $36 million Dinosaurs in Their Time exhibition, in which the museum’s historic Dinosaur Hall was expanded and updated based on current scientific understanding of dinosaur biology and Mesozoic biodiversity. The exhibition is home to the nation’s third largest display of mounted original dinosaur skeletons. (Image right: Mathew Lamanna/Image provided by M. Lamanna)

“Matt’s work in Antarctica has been very important for helping us understand the role this enigmatic continent played in the evolution and migration of vertebrate animals at the end of the Age of Dinosaurs,” said Sara Burch, assistant professor of biology.

Lamanna received an M.S. and his Ph.D. from the University of Pennsylvania's Department of Earth and Environmental Science. His research focuses on dinosaurs, birds, and crocodilians that lived during the Cretaceous Period, the third and final period of the Mesozoic Era, or Age of Dinosaurs.