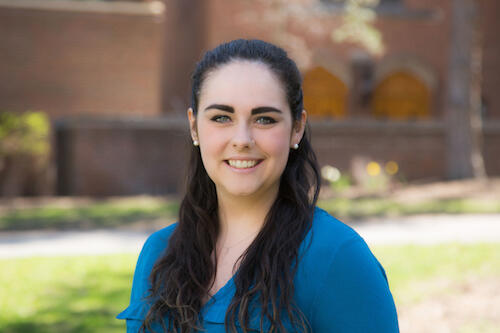 Meet members of Geneseo's Class of 2017, who exemplify the college’s commitment to community, innovation, creativity, sustainability, and excellence. In the coming weeks, student writers will highlight our newest alumni and the contributions they have made, the calling they have found and discoveries made along the way. Hear Brianna Kelly's favorite Geneseo memory.

For vocal performance major Brianna “Bria” Kelly ’17, opera is more than singing. It is connecting with people so that they feel understood.

One of her first public singing concerts was for the Honors Recital, held at the Rochester Fringe Festival. The stage was in a public theater.

“A woman came up to me who had never seen me before and she was crying. She said, ‘You know, you just made me think of my husband, who passed away a couple of years ago, and I felt him here with me while you were singing,’” says Bria. “I was like, ‘If I can make someone feel like that, then this is what I’m going to do.”

She originally transferred to Geneseo as a sophomore in the psychology degree program. Then, Assistant Professor of Music Pamela Kurau encouraged her to audition for the music program.

“It’s more than singing — it’s connecting with people,” says Bria. “Through singing, we have an opportunity to make people feel comfortable.”

During her time at Geneseo, Bria has been a member, the president, and a soloist of acclaimed Chamber Singers, directed by Chair of the Department of Music Gerard Floriano’84. She also performed in the soprano chorus of Elixir of Love in 2015 and La Traviata in 2016 with the Finger Lakes Opera Company. Additionally, Bria has performed roles in operettas by Gilbert and Sullivan such as the Duchess in The Gondoliers and Katisha in The Mikado in Clifton Park, N.Y.

This summer, Bria will attend a six-week summer study at the American Institute of Musical Studies in Graz, Austria, performing in concerts and taking classes to prepare her for the professional world of music.

Following her summer study, Bria will start her masters in music of voice performance at the Royal Academy of Music in London — considered to be one of the best conservatories in the world.

Ultimately, Bria anticipates staying at the Royal Academy of Music post-masters to concentrate on opera and perform with the Royal Opera Academy.

Beyond that? She says that so long as she is connecting with people, she will sing any art form.

“As long as you can reach people that way, whether it’s through opera characters or through maybe church music ... Whatever it is, as long as I’m doing that and as long as I’m achieving that with someone, then I’ll just sing and do whatever that is,” she says. “It doesn’t even have to be a whole group; as long as it’s one person I’m connecting with, I’ll be singing.”