Colleen Bonadonna '93: On the Front Lines of Eradicating Polio 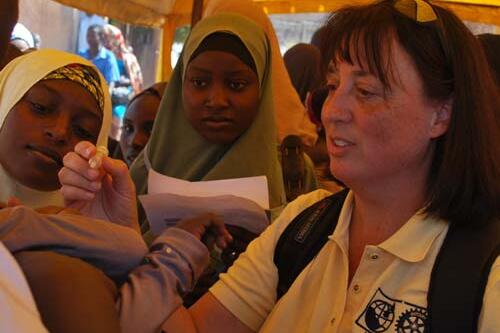 Colleen Bonadonna '93 is a leader in the fight against polio for Rotary International and has distributed vaccines in India and Nigeria.

This article originally appeared in the Scene alumni magazine.

The near elimination of the crippling disease is due, in large part, to members of Rotary International, including Colleen Bonadonna ’93, who has served as the Rotary Polio Plus Chair for Districts 7600 and 7610 in Virginia for a decade.

Rotary International helped spearhead the Global Polio Eradication Initiative in 1988 along with the World Health Organization (WHO), UNICEF, U.S. Centers for Disease Control, and the Bill & Melinda Gates Foundation.

Bonadonna has made the elimination of the virus her personal mission, leading education and advocacy efforts for polio eradication for hundreds of members in Virginia. She has also traveled to Nigeria once and to India seven times to inoculate children. This coming spring, she’s off to Ethiopia.

“It’s an amazing feeling to give a child the drops, knowing that you’re helping to prevent them from becoming crippled or even die,” says Bonadonna. “The first child I vaccinated was about 3 months old. Her mother put her in in my arms, and as I gave her baby the vaccine, our eyes locked. We didn’t speak the same language, but I knew she was thanking me. It was a humbling experience; one I’ll never forget.”

Bonadonna is as an assistant leader on the trips abroad, meeting with representatives from UNICEF and WHO in Delhi to organize Rotary volunteers, who also work on other outreach projects there beyond polio.

Bonadonna joined Rotary in 2009, after retiring from a successful career at CooperVision and then the former Solvay Pharmaceutical company, where she specialized in managed care markets.

Since she was a child, she’s wanted to make a difference in people’s lives. “My sister and I lost our father when we were young. We had very humble beginnings,” says Bonadonna. “It was through the kindness of others that we had a Christmas one year. That motivated us to want to give back. Now, it has come full circle.”

Bonadonna remembers helping with a Habitat for Humanity project at Geneseo, which has stuck with her. “Geneseo prepared me to succeed in my career path, but it also opened my eyes to the needs of people in our community and others,” she says.

Bonadonna is a past president of a local Rotary club, and has been the Polio Plus Chair for District 7610 for a decade. One year, she visited 200 clubs in 200 days to boost support.

With that support, Rotary members have raised more than $1.2 billion towards the eradication of polio. As a result, 2.5 billion kids have been vaccinated, and 16 million have been saved paralysis. Polio is now endemic in only Afghanistan, Pakistan and Nigeria.

“That’s the amazing thing,” says Bonadonna. “You can make a difference in one person’s life — everyone has that opportunity. It’s why I joined the Rotary. You can do something yourself as a Rotarian, but then you bring in one person, then another and another, you can make a greater impact in your local community, and in the global community.”