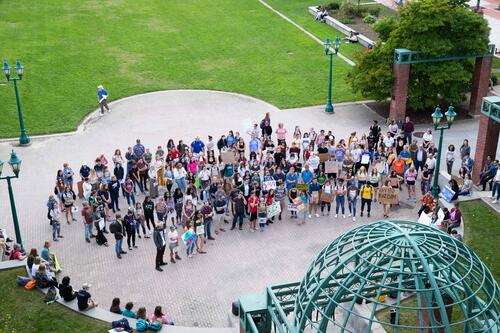 Members of the campus community held a rally in 2019, demanding awareness of and action against climate change. (SUNY Geneseo/Keith Walters '11)

In the resolution, members stated that SUNY — and Geneseo, as a signatory to the College and University Presidents’ Climate Commitment that has incorporated the United Nations' Sustainable Development Goals into its strategic planning — should serve as a model of responsible and sustainable investment to university systems across the United States, as climate change threatens human civilization, with effects including massive displacements of populations, hunger, disease, droughts, and floods around the world. It also cites the worldwide acknowledgment of the climate emergency, including the 195 signatories of the 2016 Paris Agreement.

"This resolution sends a clear message to SUNY from those of us whose retirement accounts are managed by TIAA: Demand transparency. Demand divestment from fossil fuels and from companies and projects that are violating human rights and wreaking havoc on the environment," says Paul Schacht, professor of English and director of the Center For Digital Learning. "These investments don't reflect our values, and they're contributing to a climate crisis that is the greatest current threat to civilization. They're also, as it happens, foolhardy investments from a financial perspective. The rest of the world has woken up and is moving on. It's time for TIAA to do the same."

The resolution shares that TIAA has $8 billion invested in industries promoting fossil fuel production, distribution and consumption and $508 million invested in agribusiness companies associated with deforestation, indigenous rights violations, and severe climate impacts. College Senate members also cite that TIAA has directly financed the construction of a fracked-gas powered electric generating station in Dover, N.Y. In addition, New York State Comptroller DiNapoli has pledged in 2020 to divest the state pension fund of the riskiest oil and gas holdings by 2025 and to aim for net-zero emissions by 2040.

Members of the College Senate are also asking SUNY to choose a different investment institution if TIAA does not divest in a transparent, time-bound manner.