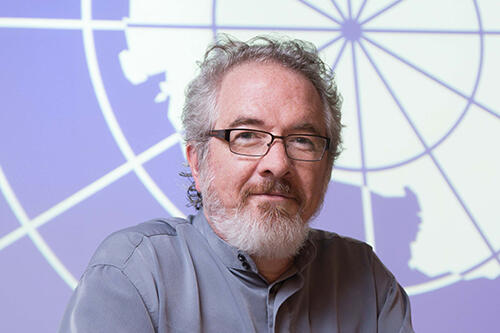 Faculty member Glenn McClure’s “Music in the Numbers” grant from the NSF will support the exploration of sonification in the interpretation of large amounts of data.

Faculty member Glenn McClure has received a $50,000 National Science Foundation Innovation Corps-National Innovation Network Teams grant to explore the interpretation and representation of large amounts of data through non-speech audio such as music.

The project, titled “Music in the Numbers,” is driven by novel sonification software that produces sound by translating numerical sequences of archived and real-time data, applicable to industries that could benefit from the ongoing interpretation of big data using non-speech audio to represent the data.

“The ear can process certain kinds of information better than the eye, especially if the information changes over time,” said McClure, principal investigator for the project and also a faculty member at the Eastman School of Music and Paul Smiths College. “The audio interpretation of the information will be an alternative or complement to the visual analysis to reduce visual data overload.”

McClure says the project is a shining example of the fundamental value of a liberal arts education.

“With 'Music in the Numbers,' we have the meeting point of cutting edge science from the bottom of the planet, a Geneseo business student, and a composer whose artwork is giving inspiration to a new data analysis tool,” said McClure. “This kind of endeavor celebrates the core of Geneseo’s identity.”

All team members will participate in the I-Corps Curriculum, which provides real-world, hands-on, immersive learning about what it takes to successfully transfer knowledge into products and processes that benefit society.

McClure laid the groundwork for the grant a year and a half ago when he joined a team of climate scientists in Antacrtica, where he gathered seismic data that he later converted to sound to present in both choral and instrumental musical compositions. The NSF funded that work through an Artists and Writers Fellowship.