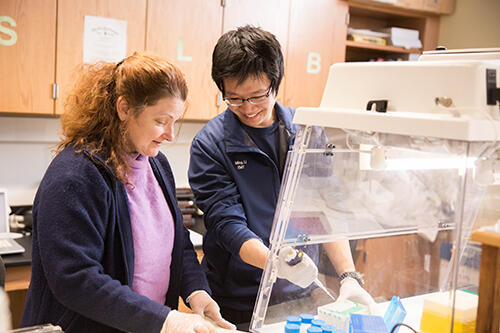 In Beijing, Mingxin Li ’16, dreamed of seeing the blue sky through a seemingly eternal layer of dark smog and smoke that billowed from countless factory smoke stacks.

When Ming was 5, his father left the family — and his career as a doctor — for America. He took a job in a print factory on Long Island, hoping what he did would lead to a better future for his son.

After his father left for America, Ming lived with his grandfather and his mother. And he studied — a lot. In China, nine years of school is compulsory, but only the most dedicated students do well enough on their exams to get into high school. Ming studied 14 hours every day to pass “examination hell,” to earn his place at an excellent school.

He and his mother came to America, too, when his grandfather died of an aggressive form of cancer. That event led to Ming’s passion: cancer research.

First, he had to earn a high school diploma. To Ming, “education  is everything” and the core to his future, including respecting what his parents did for him. In China, his father had been a doctor. His mother was a professor, willing to become a home care attendant so he would have opportunity.

He tears up when he talks about his parents. “My parents made so many sacrifices,” he says, “I need to show that it was worth it.”

Ming invested hundreds of hours into his high school studies, and overcame his language obstacle: He took the SAT three times to improve his score from a 1500 to a 1700 then finally a 1900. His hard work enabled him to choose Geneseo.

“I wanted a close-knit village environment that represented everyday America,” he said.

Ming made the most of his college experience, engaging in researching, volunteering and learning. He earned membership in five honor societies, including Phi Beta Kappa.

At Geneseo, he says, he even found a part of himself he had to give up in China: “I had no time to do art, which I loved.” Here, he re-explored his passion by taking drawing classes. 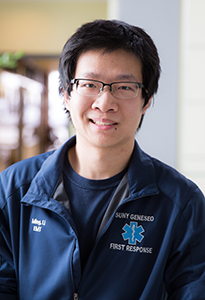 Working towards his goal of becoming a doctor, Ming secured a research position in his freshman year with Associate Professor Jani Lewis to study the effects of clobetasol drug on the expression of surface proteins in vulvar cancer cell lines. The goal is to improve the ability to locate the cancer cells for treatment.

Ming was also a volunteer member of the Geneseo First Response team, logging in 1,800 hours on shifts to help fellow students. He was crew chief during his final semester in fall 2016. Serving on the rescue crew is “one of the most American things to do,” he says.

“Helping people in emergencies pushes me to go further and to do more for my patients,” he says.

At home in Flushing, N.Y., Ming also serves on the volunteer rescue squad. One experience last summer renewed his calling to help patients — as a doctor who specializes in cancer, but also person to person eliminating language barriers.

He had spent a long day volunteering in a hospital in Queens, when Ming saw a Chinese man suffering with abdominal pain in a hospital corridor. Because the patient couldn’t speak English, Ming says, he hadn’t really been treated for over five hours.

Ming used his Chinese to translate, and help the patient get the care he needed.

Ming graduated from Geneseo in December 2016 with a biochemistry degree. Now he’s home studying for the MCAT for in pursuit of medical school, and prepping for the language comprehension portion by reading a lot of books and newspapers.

He also misses Geneseo and it’s close-knit community. He says he truly cherished every second.

“Geneseo is every part of my future,” Ming says. “It’s bittersweet. I still dream of taking care of patients as a Geneseo First Response member. I really miss all the things I did in school, and miss all my friends and professors.”

He says his life has shown him that no matter what people have, or what they come to America with, they can succeed: With an end goal, everyone has an ability to succeed and make a name for themselves.

Geneseo, he says, gave him the tools to really succeed.

“No matter how well educated or wealthy you are, you still breathe the same air and live under the same sky,” he says. ’... I wouldn’t exchange the years in Geneseo with anything in the world. I’m really proud of myself for constantly working this hard, getting involved, and making a difference.”