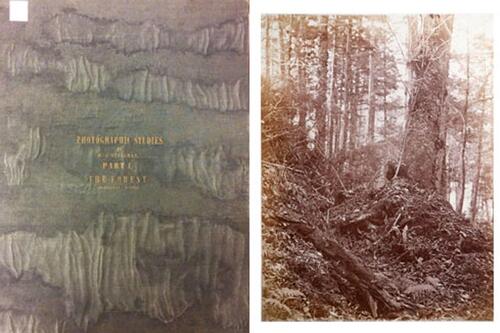 William J. Stillman portfolio (left) and one of the photographs borrowed by the National Gallery. (SUNY Geneseo/Elizabeth Argentieri)

“The items we loaned are part of an extremely rare portfolio, circa 1859, of 15 mounted photographs of the Adirondack woods by William James Stillman,” said Elizabeth Argentieri, special collections and archives research librarian. The book is one of only four known such portfolios by Stillman (the others are at the Smithsonian American Art Museum; the Amon Carter Museum of American Art, Fort Worth, TX; and the Adirondack Experience, The Museum on Blue Mountain Lake, NY).

The American Pre-Raphaelites celebrates the 200th anniversary of the birth of John Ruskin (1819–1900), the most influential art critic of the Victorian era, and features more than 80 paintings, watercolors, drawings, and photographs created by American artists who were profoundly influenced by the renowned critic.

Ruskin’s work inspired the pre-Raphaelites, a group who opposed art with idealized images (such as those in work by the Renaissance artist Raphael) and were devoted instead to accurate documentation, especially of the natural world. The images in Stillman’s portfolio strive for that, depicting rugged woodlands and uninhabited forests.

“Stillman’s photos are much like other works by pre-Raphaelites,” said Argentieri. “They’re not idealized imagery — they’re very raw.”

Stillman was a well-known American artist, journalist, diplomat, author, and historian. In 1850, he traveled to England, becoming acquainted with Ruskin and falling under the influence of pre-Raphaelites such as Dante Gabriel Rossetti and John Everett Millais. Returning to the States, Stillman devoted himself to landscape painting on Upper Saranac Lake in the Adirondack Mountains, and in 1859 led an expedition to Ampersand Pond, where it is believed he took the photographs in the portfolio. The photos — mostly of the pond, boulders, and trees — are some of the earliest known images of the central Adirondacks. The exhibition has mounted the photographs adjacent to Stillman’s 1854 oil painting “Saranac Lake, Adirondack Mountains (Study on Upper Saranac Lake).”

“Stillman was one of the earliest American photographers to make a landscape photograph that wasn’t a ‘view’ or ‘topographical’ but was made for purely aesthetic (and spiritual) purposes,” said Diane Waggoner, National Gallery of Art’s curator of 19th-century photographs. “These photographs were unprecedented within American photography, with Stillman employing Ruskinian art theory and practice in his choice of subject and compositions.”

The National Gallery located Stillman’s photographs through WorldCat, a cooperative catalog that functions as a discovery tool and contains records of Geneseo’s Special Collections’ materials as well as millions of holdings from thousands of other collections worldwide. The Milne Library Special Collections are used primarily for research and have prompted inquiries and visits from students, outside scholars, and researchers from around the globe.