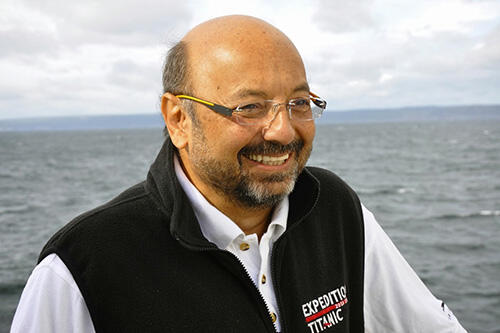 American oceanographer and explorer David Gallo will be the keynote speaker at Geneseo's two Commencement ceremonies May 12.

American oceanographer and explorer David Gallo will deliver the keynote address for Geneseo’s two Commencement ceremonies on May 12 in the Ira S. Wilson Ice Arena. The morning ceremony begins at 10 a.m.; the afternoon ceremony begins at 2 p.m.

Gallo is senior advisor for strategic initiatives and programs at RMS Titanic Inc. Previously, he was senior advisor for strategic initiatives at the Center for Climate and Life of the Earth Institute at Columbia University. Prior to that, he was director of special projects at the Woods Hole Oceanographic Institution, a preeminent, globally recognized scientific laboratory.

Gallo has been at the forefront of ocean exploration, participating in and being witness to the development of new technologies and scientific discoveries that shape the view of planet Earth. TED Conferences describe Gallo as “an enthusiastic ambassador between the sea and those of us on dry land.” With nearly 13 million views, his presentation “Underwater Astonishments” is among the most watched of all TED presentations.

In 1987, Gallo joined Robert Ballard’s team at Woods Hole Oceanographic Institution as assistant director of the Center for Marine Exploration. He has participated in expeditions to all of the world’s oceans and was one of the first scientists to use a combination of robots and submarines to explore the deep-sea floor.

Most recently, he co-led an expedition to create the first detailed and comprehensive map of the RMS Titanic. He also co-led the successful U.S. effort to locate the wreck site of Air France flight 447. He currently is involved in planning a return to TITANIC and an expedition to trace the story of Atlantis.

Gallo received both his bachelor’s and master’s degrees in geology from SUNY Albany and his doctorate in oceanography from the University of Rhode Island. Gallo's son is a 2016 Geneseo graduate.