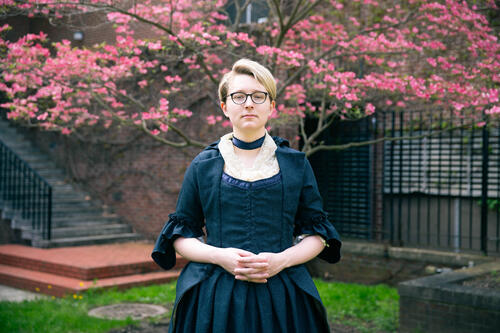 Katherine Andersen ‘19, from Bronxville, NY, who majored in international relations, has a passion for costume construction. While studying abroad in the Netherlands during Fall 2018, she saw an exhibit at Amsterdam’s Rijksmuseum on the Dutch trade industry during the 18th century. It appealed to her design sensibilities, as it featured different types of cloth that the Dutch imported, and it inspired her to research how women’s fashion evolved with the growing international trade in textiles. Upon returning to Geneseo, Andersen went a step further, actually constructing a historically accurate wool traveling gown.

Andersen, who graduated in May, spent her final semester working on an advanced costume design directed study under the guidance of Geneseo’s theatre costume designer Bonita Stubblefield. “Bonnie was the person who sparked this love of garment creation and design in me,” Andersen said. Having already worked for multiple semesters in the costume shop with Stubblefield, she was ready to take on this challenge, and there was no one else she’d rather work with.

The finished garment consists of many layers, which took Andersen hundreds of hours to complete. The visible part, the hooded wool gown, covers up the traditional underpinnings, including a corset, chemise, petticoat, and bum roll.

“Katherine made her job more difficult,” Stubblefield admitted, reflecting on Andersen’s decision to modify the garment to fit her taller frame. “If she had wanted to just recreate a historical garment, she could’ve done it straight off a pattern.”


The authenticity of the construction was paramount to the project, with minor exceptions allowed for practicality, like the use of a sewing machine for specific parts. But, the dark blue wool used for the overgarment was sourced from Ireland, as it likely would have been in the 18th century.

What does costume construction have to do with Andersen’s international relations major? “We don’t realize how much our garments are impacted by politics,” she explained. “Clothes are just something that are, you don’t really think about the background material, as to how they got there, what they’re made of, who made them, and what trade agreements made it possible to get all those little pieces together in one place.”

The decision to create a wearable garment added countless hours onto her workload, but Andersen doesn’t regret the extra effort. “I don’t see the point in making something just to look at,” she said. “I want something that’s functional.” She hopes to show off the garment during a visit to Colonial Williamsburg in Virginia.

The planning, organization, and time management required to create intricate historical garments will prove to be useful in any of Andersen’s future endeavors. With the technical skills that she developed while working in the costume shop, she plans to create her clothing. Through directed study, she was able to integrate her passion for international relations with her love of costuming, constructing a beautiful end to her time at Geneseo.