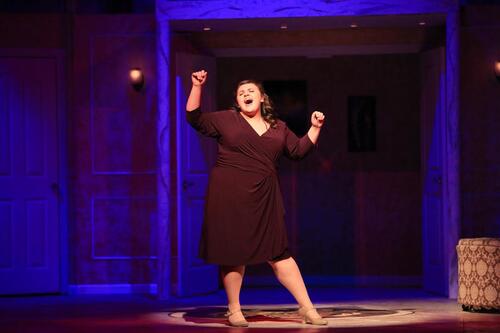 Katelyn Brooks ’19, from Gates, NY, a musical theatre and communication double major, understands what a life in theatre will take.

Part of Geneseo’s growing musical theatre program, Brooks has participated in 11 Geneseo productions, from Pippin to Women on the Verge of a Nervous Breakdown, as well as several community and professional productions, including at Rochester’s Geva Theatre. Years of voice and dance lessons and an active role in the Geneseo Chamber Singers have burnished her musical theatre credentials, and she’s poised for relocation to New York City and a launch into the theatre life.

The Senior Showcase in March gave musical theatre majors a taste of New York City theatre. Initiated this spring by Don Kot, coordinator of the musical theatre program, the showcase involved a week of seeing shows, taking master classes, and performing a program at the off-Broadway theater Playwrights Horizons. Students also gained exposure to the wide variety of theatre-related careers beyond performance, such as casting, financing, and house management.

“People often think the theatre world is very competitive and cutthroat, but the generosity is overwhelming,” Brooks said. “People want to help you succeed.” Geneseo theatre alumni who met with the group impressed Brooks with offers of help for everything from finding the subway to setting up meetings with a temp agency.

Brooks has widened her experience in other ways as well, such as playing characters with widely ranging ages, exploring theatre marketing and social media promotion, and learning technical production skills in lighting, set design, costumes, and more. For the past two years, she has also served as an elected student member of the faculty-run Play Selection Committee. “We get to research lots of shows,” she explained. “We talk about technical elements, orchestra requirements, what’s within our budget, what fits the people that we have the best — a lot of aspects go into picking a season. We choose shows that complement each other so students are offered a variety of shows to work on.”

Brooks loves performing, but she values the experience she’s gained behind the scenes and during the Senior Showcase, keeping it on the back burner in case she’s “not 100 percent sure of the whole grind of being an actor.” The theatre community she encountered in New York City encouraged her.

“A lot of them were actors and started out performing, and they realized they wanted a more stable, 9-to-5 job,” she said. “It was great to see how fulfilled they were with the idea of being a part of the theatre. They were working toward this greater goal, and they were happy to be part of the puzzle.”

Brooks is happy to be part of that theatre puzzle, too, in whatever form it eventually takes. “I’m not sure what it’s going to be like until I experience it,” she said. “I hope I can take what I learned at Geneseo and use it to skyrocket me onto the next thing.”