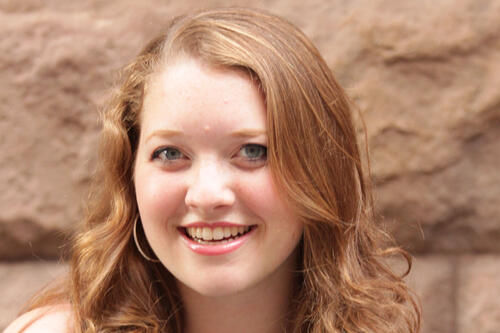 Caution: What you’re about to read might lead to a commercial jingle getting stuck inside your head for the rest of the day. (Don’t say we didn’t warn you).

“The Hess Truck’s back, and it’s better than ever…. Lifting spirits this year — the Hess Truck’s here!” You know the catchy jingle … but what you probably didn’t know is that for a few years one of the voices on the popular Hess TV and radio commercials belonged to a Geneseo student.

Allison Altschiller sang about Hess trucks — and in commercials for other products — early in life. But those ads were just the beginning for the 21-year-old singer/songwriter from Pelham, Westchester County.

Known professionally as Allison Leah (pronounced LAY-uh), Altschiller has released two singles, and she has a six-song EP coming out later this spring. After graduating next month, the communication major will focus on promoting her EP and pursuing her budding music career.

“The main thing in my life right now is getting this EP done, getting it released and then touring it,” she says.

Growing up in a musical household, Altschiller has been interested in music for as long as she can remember. She started singing at a young age.

“I think the first time I ever sang was probably before I could talk,” she recalls.

Altschiller’s first public performance was at around age 5 when she sang “America The Beautiful” in front of an assembly at Siwanoy Elementary School.

“It went over pretty well,” she says, “and I never stopped.”

She eventually began songwriting, which emerged as a passion a few years ago after attending, with her father, the Bonnaroo Music and Arts Festival, held annually in Tennessee. Watching a young artist, around her same age, perform on stage inspired her.

“I turned to my dad and said, ‘I want to do that,'" says Atlschiller. Her father, she says, replied, “Then you better start writing music. So I have been ever since."

Altschiller premiered her then-new song, “Love Song,” in 2016 at an open-mic night at Jed’s in Nashville. The performance led to an interview and performance on a Nashville radio station, Lightning 100. After working on it for nearly a year, she recorded and released the pop song, now called “A Love Song," last October. A second single, “Black and White,” came out in January. Geneseo’s WGSU-FM (89.3) plays both songs — making it the first radio station to air Altschiller’s music in regular rotation.

Altschiller wrote the lyrics for each of the six songs on her debut EP. One track, “Colorado,” is more of “singersongwriter-esque” track — akin, some say, to a Joni Mitchell-type song, she says.

“When I started, I was writing more about my own personal experience, and then I branched out and started writing about other people’s emotions, experiences,” she says. “Now, I just try to encompass it all together. A lot of my inspiration comes from my friends, people around me and my own experience. Small situations in life inspire me in large ways.”

“I think it’s interesting because nobody really knows exactly what you’re talking about,” she says. “I really like singing about myself. I like showing people vulnerability.”

Other influences include some of the bands commonly heard around her childhood home and at concerts such as the Grateful Dead, Dave Matthews Band and Phish. Favorite artists later included Daughter, Imagine Dragons, Ed Sheeran and Taylor Swift. But she wants her style to be unique.

“She seems to be doing this for the right reasons,” says Jon Altschiller, Allison’s father, an audio producer/engineer who has worked with high-profile clients such as Phish and Bruce Springsteen and owns New York City-based ’Chiller Sound. “She cares deeply about her music and seems to enjoy the process of crafting a song and then realizing it in a final recording. During performances, she seems genuinely moved by her listeners when they approach her having connected with one of her songs.”

Derryberry, a producer, engineer and musician who has worked with artists such as Bruce Hornsby and Dave Matthews, says raw song demos by artists he’s working with routinely are heard around his house, but normally they go largely unnoticed by his family, he says. But one of Altschiller’s songs peaked the interest of his wife and 10-year-old daughter.

“They both took notice of it as something they liked, particularly what she had to say on social issues,” Derryberry says. “She’s speaking about it in a very compelling, engaging way, but also in a very artistic and beautiful way, which is not easy to do. She’s really got an ear for the craft and the melody and everything. She’s definitely one of the brightest spots as far as young songwriters I know.”

Just after turning 15, Altschiller auditioned for “American Idol.” Ultimately, though, her desire for originality and creative control as an artist make the popular TV show (recently revived on ABC following 15 seasons on Fox) a less-than-ideal venue for the now more-seasoned songwriter and performer.

“I’d rather be writing for somebody else but have it be my song than be singing and have it be someone else’s song,” she says.

Early Career and Other Experiences

Involved in musical theater throughout high school and college, Altschiller is a member of the Geneseo a cappella group Exit 8 and has served as chamber-music festival coordinator. In Geneseo, she has performed at Cricket’s Coffee Co., Sweet Arts Bakery, Starbucks and other on-campus venues, including Genny Fest. Downstate, she has performed at The Bitter End in New York City.

As for those commercials — such as the one for Hess Trucks (which for two years she sang in both English and Spanish) — Altschiller hasn’t had as many opportunities since leaving home for college and focusing more recently on her own music. But she loved working on the ads, she says, and is open to returning to commercial voiceover and jingle work once back this fall in the New York City area.

Her break came at around 8 years old when an agent, hearing her sing at a holiday party, asked her parents if she would be interested in doing commercial voiceovers. In addition to the Hess ads, Altschiller’s voice has been on a General Electric “Healthymagination” TV spot, an Alexian Brothers Health System television ad and projects for other clients.

Childhood friends knew of her sideline jobs because she occasionally would miss school for opportunities. But not all of Altschiller’s college friends know about her interesting background.

Her motivation today is different.

“There’s nothing like right after you write a hook, where you know ‘This is going to be good,’” she says. “’I’m not going to sleep tonight because I’m just going to stay up all night finishing this song.’”

And once a song is completed, audience reaction keeps her going.

“When somebody comes up to you afterwards and says, ‘Wow, that song really touched me’ or ‘That’s exactly what I’m going through’ … that’s the best feeling in the world.”