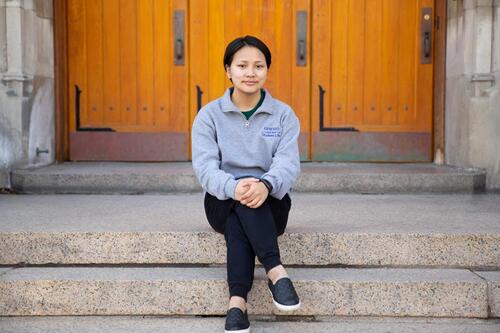 Tshering Sherpa ’21 has been named a Fund for Education Abroad (FEA) Scholar for 2019–20. She will travel to Cadiz, Spain, and live with a host family for six weeks while studying Spanish at the Centro Superior de Lenguas Modernas (CSLM), a language school at the Universidad de Cádiz. Sherpa is a double major in psychology and international relations and the second Geneseo student to win this award (Waderlie Mendez ’20 won in 2018–19).

The nonprofit FEA was established in 2010 to provide scholarships for international experiences to students underrepresented among the U.S. study abroad population. It supports minority, community college, LBGTQ+, and first-generation college students before, during, and after they participate in education abroad programs. For 2019–20, FEA considered more than 2,350 applications from 517 colleges and universities, and Sherpa received one of only 135 scholarships offered.

“I have always had a keen interest in languages,” Sherpa said. “My early exposure to Sanskrit, Hindi, Nepali, and English permitted me to see the world through different lenses. Being multilingual has shaped the way I perceive the world and helped me understand different cultures. I love the idea of living in Cadiz, practicing my Spanish, and being able to witness Spain through the lives of its inhabitants.”

Sherpa, now of Queens, NY, grew up in Kathmandu, Nepal, and immigrated to the United States at 15. At Geneseo, she works as a resident assistant in Wyoming Hall, home to the living-learning communities Global House and Food Culture House that celebrate international culture. As an RA and a facilitator in the Office of Diversity and Equity, she seeks to “create an inclusive atmosphere that accepts, learns, and encourages those of different cultures, languages, and races.”

As a Spanish minor, Sherpa relishes the challenge of the Spanish immersion CSLM program to “engage with native speakers, learn more about the grammatical aspects of Spanish, the cultural etiquette, behaviors, and linguistic variations throughout the region.” In doing so, she believes she will “discover more about myself in terms of the many identities I represent.”

This year, 91% of the FEA Scholars are of minority backgrounds, and 90% are first-generation college students. According to the FEA website, “Applicants from groups underrepresented in study abroad are given preference, in an effort to make the demographics of U.S. undergraduates studying abroad reflect the rich diversity of the U.S. population.” Since 2010, a total of 425 Scholars have benefited from more than $1.7 million in scholarships.

In the future, Sherpa aspires to become an international human rights lawyer, working on the refugee and immigration crisis by “advocating, challenging discrimination, and defending the rights and freedom of underrepresented people. As an immigrant myself, I want to represent the refugee population on the international stage. I believe my linguistic and cultural competency will allow me to better form relations with foreign countries and people effectively.”

“Studying abroad,” said Sherpa, “will provide me with a platform to gain valuable and practical experiences and knowledge of other individuals’ stories outside the confines of the United States. It is our understanding of others that will unite us, and that is possible through language, culture, and the self-reflective nature of study abroad.”