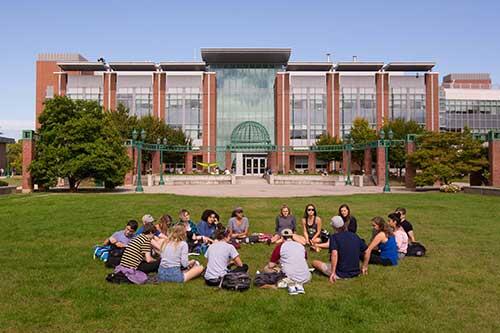 Students sitting on the lawn of SUNY Geneseo campus

GENESEO, N.Y. –– Further work on Geneseo’s new eGarden is underway, with Dan DeZarn, director of the Office of Sustainability, expressing his delight in seeing its evolution thus far. The garden is a one-acre, off-grid education and research facility on the west side of campus that focuses on renewable energy, organic agriculture and sustainable organic waste management.

“It’s all been a steady progression of the initial vision,” said DeZarn. “I’m really excited to see students be actually able to engage in it.”

DeZarn explained that one of the major developments was the installation of solar panels through the combined efforts of Stephen Padalino––Distinguished Teaching professor of physics––members of Geneseo’s Facilities department and a number of students. In addition, a temporary equipment shelter has been constructed, plans for the main barn are in the final stages and a support pole for the wind turbine was put in place.

DeZarn emphasized the specific uniqueness of the wind turbine, noting that it “is going to be  raised and lowered periodically so that students working on research projects can actually get their hands on the turbine and make modifications if they need to.” He also noted that there are plans underway for the development of an organic garden next summer sponsored by the school and Campus Auxiliary Services.

The level of student involvement is perhaps one of the most noteworthy features of the project, with 12 individuals deeply entrenched in both the research and implementation process. The group consists of seniors Brandon Mark, Amy Walters, Jennifer Lomaki, Eleanor Trelstad, Zachary Hallenbeck, Ariana Sabzeghabae; also involved are juniors David Chin, Cara Gannett, Scott May, Jorden Griffin and Jasmine Beloy and Mary Keenan ’15.

Mark noted that he has been involved in the eGarden project since his freshman year, helping to “determine what the eGarden needed and helped order nearly all the components that are currently in place.” Mark and Hallenbeck are working together on the electric car project.

Despite the concentration of science majors involved in the project, Mark stressed that the project welcomes any and all majors––the eGarden is meant to benefit the community as a whole.

“It [the eGarden] is essentially a tool to educate people from all backgrounds of study, not just the sciences, on the effectiveness of alternative energy sources,” said Mark.

Working with Sabzeghabae, Gannett’s role in the project is “creating solar heat collectors, one of which we filled with soda cans to be used as the material to absorb heat from the sun.”

Gannett reiterated Mark’s sentiment that in addition to providing hands-on experience to interested students, the eGarden is ultimately meant to educate and inspire the Geneseo population.

“The project is all done with materials that are affordable and accessible, so the project is one that could be easily recreated by anyone with access to the right tools and with desire to reduce their impact on nonrenewable energy sources,” said Gannett.

Beloy and Griffen are working not with metal tools, but with live organisms. “Our research in the eGarden is, basically, to grow as many algae as we can and then try to see how much lipid content we can get out of them, which will eventually turn into biofuel,” said Beloy.

She emphasized her belief that the project’s impact can extend far beyond the town of Geneseo.

“I think that our role in the eGarden is important not only for our undergraduate research but also for our future on Earth,” said Beloy. “Proving whether or not algae would be a better alternative to fossil fuels and/or natural resources will impact how we can improve our planet.

Seeing students be able to apply sustainability concepts in a real-life environment is something that DeZarn stressed as a key component of the eGarden project.

“It gives students a hands-on opportunity to engage with some of these things that we hear a lot about but don’t ever actually touch,” said DeZarn. “We hear about things like solar power and wind power and renewable energy, things like that, and they’re all kind of abstract, ambiguous ideas … this is an opportunity for people who are interested in that sort of thing to engage in it firsthand and learn how to do this.”

In addition, DeZarn noted that the government push for sustainability initiatives has created a very rapidly growing job market. He explained that the eGarden will not only allow students to have a hands-on learning experience, but will then be able to “have some background in a field that is really potentially lucrative field.”

Involvement from Geneseo community members––both on and off campus––is something DeZarn is optimistic about seeing as the project comes to fruition.

“Anybody that wants to get involved can get involved,” said DeZarn. “The hope is that eventually there will be students, faculty members and possibly even community members outside of the campus that will come and engage in the project.”