The primary neutron yield, for more than 40 ICF shots, was determined by measuring the activity of an aluminum sample activated by DT neutrons. The results were compared to the existing copper activation method. The radioactive nuclei 24Na and 27Mg, which were produced via the 27Al(n,a )24Na and 27Al(n,p)27Mg direct reactions, beta decay to excited states of 24Mg and 27Al respectively. These excited states then emitted gamma rays as the nuclei de-excite to their respective ground states. The gamma rays are detected and counted. From their numbers the neutron yield is determined.

The DT neutron yield, Yn, as measured by counting gamma rays in the HPGe detector is given by the equation:

Where W is the solid angle of the aluminum sample, n is the number density of aluminum, s is the nuclear cross section for 14.1 MeV neutrons and

is the thickness of the aluminum sample. b (E) is the efficiency of the HPGe detector at the gamma ray energy of interest and l is the decay constant for 24Na or 27Mg. Tw is the "wait time" between activation of the sample and the time when counting begins and tc is the gamma ray counting time. Ng is the number of gamma rays detected by the HPGe and R(E) is the gamma ray re-absorption coefficient for aluminum.

Three gamma ray peaks are prominent in the gamma ray energy spectrum. They are produced by two nuclear reactions, which lead to the decay of 24Mg and 27Al. The decay scheme for 24Mg is shown below.

As shown above the 24Na beta decay feeds into the second excited state of 24Mg 99.944% of the time. The transition from the second to the first excited state of 24Mg emits a 2.754 MeV gamma ray 99.944% of the time. Subsequently, the first excited state de-excites 100% of the time to the ground state, emitting a 1.368 MeV gamma ray making this transition a good indicator of the measure of activation of the aluminum sample. However the efficiency of the high purity germanium (HPGe) detector, used in these measurements, has a low detection efficiency of 2.7 % at 1.368 MeV. The gamma ray detection efficiency as a function of energy for the HPGe well detector was measured using a 9 line calibrated gamma ray source at 10 well depths. The calibration curve at 1 cm from the bottom of the well is shown below. The full set of efficiency curves for all 10 depths are not shown here.

At higher gamma ray energies the detection efficiency drops further. This makes it impractical to use higher energy transitions, such as the 2.754 MeV gamma ray in 24Mg in counting measurements with our detector. In contrast, the efficiency is relatively good near 0.7 MeV, approximately 7 %. However, the gamma ray background is large and the signal to noise ratio is poor. Our project showed that the gamma ray background at 0.843 MeV is low enough to make a good measurement with reasonable counting statistics.

The production of the 0.843 MeV gamma is shown below in the level diagram for 27Al. The beta decay of 27Mg feeds the first and second excited states of 27Al. These states de-excite and emit 0.843 and 1.014 MeV gamma rays with branching fractions of 71 % and 29 % respectively.

Shown in the next figure is a typical spectrum. The good signal to noise ratio for this gamma peak, coupled with a reasonable detector efficiency, favorable branching fraction and the 9.5 minute half-life made this the best choice for a neutron yield measurement. Due to the physical limitation of the aluminum sample size and half-life of 27Mg, yields of less than 108 neutrons produced poor gamma counting statistics for times greater than 45 minutes which is the maximum time allowed between experimental events.

The sensitivity of the aluminum activation method was modified to cover a large dynamic neutron yield range. Some of the factors are fixed by nature and the detector, such as the neutron capture cross section, the half life, the efficiency of the HPGe detector, and the branching ratio of the gamma ray transitions in the decay products. Others could be changed, such as the radial position, mass or type of the activation sample and the counting time. The neutron threshold energy is also important and must be high enough to exclude thermal or low energy scattered neutrons. Shown below is a plot of the neutron reaction cross section for the 27Al(n,x) reactions. 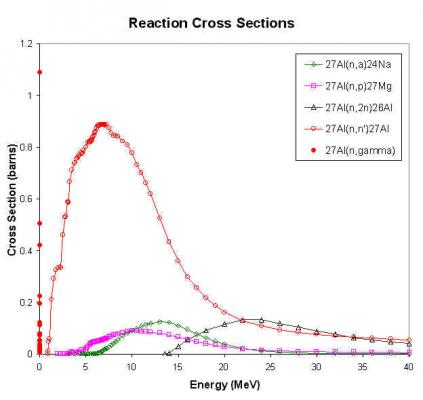 Note that the cross section for neutron capture in the 27Al(n,a )24Na reaction at 14.1 MeV is 121.2 millibarns. Compare this to 72.3 millibarns for the 27Al(n,p)27Mg reaction. Furthermore the n,n’ reaction is prompt and does not play a role in our measurement time scale.

The aluminum activation experiment used the 843 KeV gamma ray counting measurement to determine the neutron yield from DT reactions. These measurements were then compared to the yields measured with the copper activation method. A comparison of aluminum method vs. the copper method is shown below for 40 Omega shots.

The measurements reveal a very strong correlation between the two methods. The absolute yield produced by the aluminum method is consistent with the copper method by to 1%. 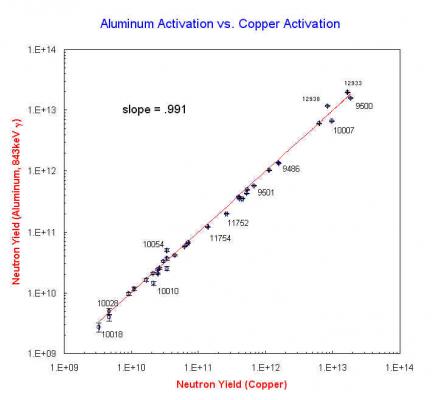