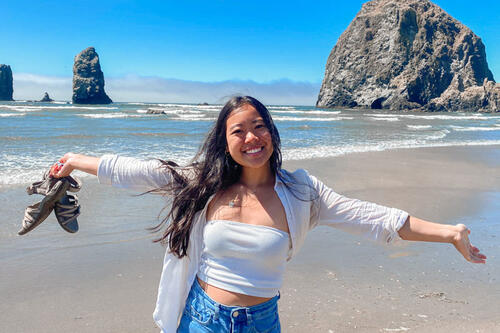 Cabahug holds dual US and Filipino citizenships and will live and work in the Canary Islands, a Spanish archipelago off the coast of northwestern Africa.

As a young Filipina immigrant, Cabahug helped her parents understand US culture and language through music. “We would listen to American songs in the car, which prompted them to ask questions about unfamiliar words,” she says. “I would play reggaeton and watch their faces light up as they heard familiar Spanish words. Finding these links between my family’s native language, Bisaya, and Spanish drove my language studies.”

Geneseo classes enhanced Cabahug’s cross-cultural knowledge, but her time in Puerto Rico as a disaster relief volunteer fed her desire to live with and learn Spanish directly from the locals. “I was fueled with a new motivation to continue taking higher level courses and seek the comprehensive language and cultural immersion I craved through study abroad,” she says.

While taking a course on Spanish civilization, Cabahug was “captivated by the liveliness and color of Spain. I knew then that I had to experience Carnaval, see Gaudí architecture in person, and enjoy Spanish cuisine. As a result, I spent the rest of the year eagerly preparing to study abroad in Cádiz, little knowing a virus would put an end to that.”

Cabahug sought out other global experiences instead, and in her senior year volunteered as a public health intern and English teacher with an organization that provides health and educational resources to Spanish-speaking migrant women and children in Quito, Ecuador.

As an ETA, Cabahug believes that language learning should be based in experience. “Cross-cultural knowledge is key to motivating students to create connections between languages,” she says. “Education systems should emphasize similarities to foster belonging and understanding. My experience with immigration and making cross-cultural connections will be vital when living and working in Spain.”

Lori Bernard, associate professor of Spanish, notes that Cabahug will be an “ideal representative of the United States due to her unique life and academic experiences: the child of an immigrant family, proficient in three languages, with experience working with people from other cultures.”

Cabahug credits her success to a strong support system among the Geneseo faculty and staff, especially Melanie Medeiros, associate professor of anthropology, and Bernard, whose Spanish classes inspired her to apply for the Fulbright.

“Geneseo is such a special place, where you can feel so at home, while also being inspired to broaden your horizons,” Cabahug says. “I am so excited to start this new adventure, but no matter where in the world I am, Geneseo (and the people who make it magic) will always have a place in my heart.”

In four of the past five years, Geneseo has been named a Fulbright Top Producing Institution by the State Department’s Bureau of Educational and Cultural Affairs in its annual article in The Chronicle of Higher Education. For the 2017–18 Fulbright cycle, Geneseo was the first dedicated SUNY institution to be named a Top Producer of US Student awards in any category—bachelor’s, master’s, research, or special-focus four-year institutions.

The US Student Fulbright competition is open to students and alumni. It is administered at Geneseo by Director of National Fellowships and Scholarships Michael Mills, who can be reached at millsm@geneseo.edu and 585-245-6002. For more information about the Fulbright and other nationally and internationally competitive scholarship and fellowship programs, visit Fellowships and Scholarships.