'Conversations Are About Learning' 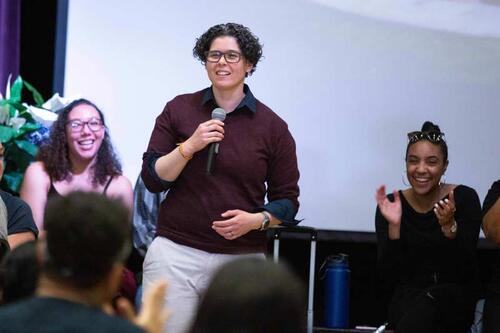 IGD is a facilitated conversation between members of two or more different social identity groups. According to routenberg, it’s a methodology used at many campuses that was created initially at the University of Michigan in the 1980s to address campus racial conflict. routenberg distinguishes this method from many other courses by pointing out that “it values emotion and lived experience as sources of knowledge, alongside theory and literature about historical context.”

Having worked with the methodology for six years while working at the University of Michigan, routenberg brought the approach to Geneseo’s campus in 2018 through the Diversity and Inclusion Community Educator (DICE) program. In the spring of 2019 when racial tensions arose in the wake of a blackface incident, routenberg worked with Provost Stacey Robertson to identify a group of individuals who would build a course-based Inter-group Dialogue program. The first IGD course will be piloted in Spring 2021.

DICE facilitators have led nearly 100 workshops for the campus. Facilitators get two full days of training each semester; routenberg says they’re taught to transform conflict, listen, and get to the depths of conversations. Topics addressed in these workshops include race, sexual orientation, allyship, privilege, and implicit bias. Workshops are shaped by the goals of the group that requests them, whether it be a fraternity or an office’s student staff.

Beyond that, the student facilitators “strive for an environment that’s interactive and engaging,” says Margaux Carmel ‘21, a women’s and gender studies major who has been facilitating IGD workshops for two years. “Our role isn’t to lecture—it’s to spark conversation. The best facilitation happens when the group rises up on its own and draws on its members’ experiences and applies the resulting knowledge.”

“These conversations are all about learning,” says Emma Lynch ’22, a political science major and another IGD facilitator. Asking questions is great, she notes, adding that at the same time, participants don’t have to contribute verbally. “Even if you don’t say anything,” she explains, “your presence is important.” routenberg agrees, noting that “silence is full of insight.”

The insight arising from IGD is changing the feeling on campus, according to all three facilitators. “It takes time,” Lynch says, “but I see a change in students. They’re asking questions about their identities that they’ve never had to ask before.” Carmel says, “Increasingly, I see a climate of taking action for ourselves as students.”

routenberg sees that, too. “What stands out is the power of self-discovery—what people learn about themselves,” routenberg says. “And change comes from the confidence they gain from being able to articulate their stories and be truly heard by others, sometimes for the first time in their lives.”

The result, routenberg believes, is that IGD “has the potential to be absolutely transformative for our community.”