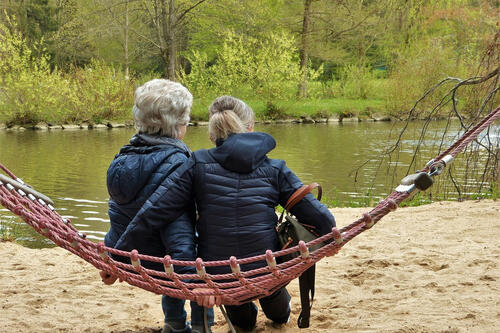 Image by silviarita from Pixabay

The 17th century proverb "My son is my son till he gets him a wife, but my daughter's my daughter all the days of her life," still rings true according to new research by SUNY Geneseo professor of communication Meredith Harrigan and Allison Alford, a clinical assistant professor of business communication in Baylor University’s Hankamer School of Business. And yet, the roles of daughters in the family structure and society are difficult to define, and they’re rarely understood, even by daughters themselves.

“In this research, we found that the relational work daughters perform, especially with their mothers, is frequently overlooked and unexamined, and, in turn, a form of invisible labor,” said Harrigan. “We hope this research encourages individuals to become more aware of the relational work that various family members perform. We also hope it encourages new scholarship on daughtering.”

The study, “Role Expectations and Role Evaluations in Daughtering: Constructing the Good Daughter,” published in the Journal of Family Communication, centers on mother-daughter relationships and looks at how daughters perceive and define their roles in that relationship.

Harrigan and Alford analyzed the interviews of 33 women, ages 25–45, who have living mothers under the age of 70. The age ranges capture a time for mothers and daughters with the highest likelihood that neither was the caregiver of the other and both were in relatively good health.

The research shows that the “language” of daughtering is almost nonexistent in social discourse as well as in scholarly or popular works. For example, a daughter who is caring or supportive is often described as being “motherly.”

“That’s an example of giving credit to mothers as being the only people who care for others, versus saying that the daughter is a caring person or that she’s supportive,” Alford said. “We want to think of daughtering as its own form of work and responsibility and put a value on that, so we can see the value that we’re putting into our family relationships and family systems.”

One desired outcome of research into this area is that daughters will be given a voice and their valuable work within the family will be acknowledged.

Analysis of the interviews with the daughters revealed four themes or role expectations for an “ideal daughter” in relation to her mother: shows respect, provides protection, elicits mothering, and makes time for connection.

Each of these efforts, though, requires work, and that work often goes unnoticed or is undervalued—even by daughters themselves, the researchers said. The study noted that many of the women who were interviewed almost naturally anticipated talking about their mothers instead of themselves.

“When asked to think about themselves as daughters and their communication in the relationship, many found themselves doing so for the very first time,” the researchers wrote. “These women noted that putting the emphasis on themselves and describing their role as adult daughters felt strange or awkward in its newness.”

Respect, the study showed, was the most common topic addressed by the daughters. “Daughters demonstrated respect by adapting their communication to affirm their mothers’ competence or otherwise avoid offending and disregarding them,” the researchers wrote. A daughter’s respect could be demonstrated by avoiding conflict, silencing disagreement, or reacting positively to her mother’s messages and supporting her mother’s position of power.

One participant in the study said she listens to her mother talk about things she dislikes and apologizes even when she doesn’t feel apologetic.

Some of the daughters interviewed said there was an expectation that they would protect their mothers. This could be protecting their mother’s wellbeing, or protecting her from being taken advantage of or disrespected by others, including siblings.

One woman described a time when she had to stand up to her brother because she felt he was taking advantage of their mother’s goodwill. But she said she also had to “get after” her mother for not setting boundaries with the brother.

The examples in the study illustrated that many daughters were champions for their mothers, but that it was also tricky.

Some of the daughters who were interviewed said they struggle with their roles as adults—or even as mothers themselves—who still need to engage with their mothers and ask for assistance.

“When a daughter calls upon her mother for guidance or activates a need for an emotional evaluation such as pride, she is fulfilling her role expectations,” the researchers wrote.

One participant in the study said of her mother: “She compliments me as a mother. I think I feel like a good daughter when I feel like I am making her proud, and she lets me know that she is proud of me.”

In their descriptions of “good daughters,” a number of the daughters interviewed said it was important to make time to connect with their mothers. This could be anything from talking on the phone, visiting, taking grandchildren to visit, or even living nearby.

Sometimes the expectations are stated outright by the mothers, but that’s not always the case, the researchers explained.

“Daughters engage in important relational work for the mother-daughter dyad and for the family as a whole,” Harrigan said. “We are glad we could begin to illuminate their valuable contribution through this research."

(Adapted with permission from a Baylor University article)