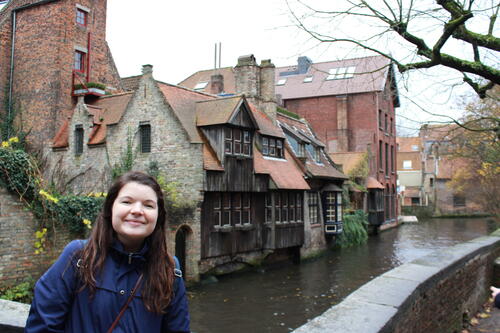 On Nov. 6, 2018,  Leandra Marie Griffith ’16 somewhat nervously entered Associate Professor Vanessa Joosen’s class at the Universiteit Antwerpen to give a seminar on the United States midterm elections that were taking place that day to a group of Belgian students keen to learn more about the American political system and ask some pointed questions.

Griffith is spending this academic year living in Belgium due to her winning a 2018–19 U.S. Student Fulbright English Teaching Assistant (ETA) award that allows her to work in the English Literature Department at the University of Antwerp, a school of 20,000 students and the third largest institution in Flanders, the Dutch-speaking northern portion of the country. For Griffith, who majored in creative writing and communication at Geneseo, the responsibility she was taking on was a bit daunting. “For the first time in my first three months, I felt out of my comfort zone,” she said. “While I am as knowledgeable as the average American regarding U.S. politics, I had no in-depth background in political science or international relations. Yet I knew that I was expected to be an expert about my home country. It was a very intimidating realization.”

Griffith stood before Joosen’s class as “a non-partisan American citizen meant to provide an objective and factual presence.” She continued with her presentation about the three-branch system of U.S. federal government, explaining how elections work, the popular “Go vote” campaigns directed at young people, and that, as was predicted for the 2018 midterms, the House of Representatives tends to switch political majorities more often than the Senate.

For a career, Griffith is considering international teaching or a job in the socio-cultural and linguistic fields, so the question from a Belgian student, “Why doesn’t the U.S. have mandatory voting?” presented an interesting comparison in political systems. “Making voting a requirement seemed an obvious solution to all attendees as a way to fix the U.S.’s low voter participation,” said Griffith. “It seemed obvious to them because it is what Belgium does. All citizens in Belgium are required to vote in elections and, if they do not have faith in any candidate, there is an option to abstain, but they still must register and attend the polls.”

Griffith anticipated experiencing a diverse environment in Belgium, both culturally and linguistically. “However, I had not expected such rich diversity within the course material as professors and students eagerly expose themselves to voices of different cultural and demographic backgrounds,” she said. “They anticipate the complexity of their own country to be mirrored in the literature they read, and they welcome the opportunity to learn about cultures different from their own. It is a perspective that has challenged me in the classroom, causing me to pause and ask myself, ‘Have I shown them all sides and all perspectives?’ ‘Have I effectively presented every voice in order for my students to properly come to their own conclusions?’”

A primary goal for Griffith as an ETA is to support the linguistic and intercultural skills of university-level Belgian first- and second-year students but also to “promote U.S.-Belgian relations through bringing the Belgian culture and spirit of multilingualism to Americans who know little or nothing about the country. It’s both humbling and rewarding to be a cultural ambassador in Belgium in this way.”

SUNY Geneseo was named a Top Producer of U.S. Student Fulbright awards in both 2018 and 2019, according to the State Department’s Bureau of Educational and Cultural Affairs. For more information, visit the SUNY Geneseo Fulbright program.