Geneseo Celebrates the Class of 2022 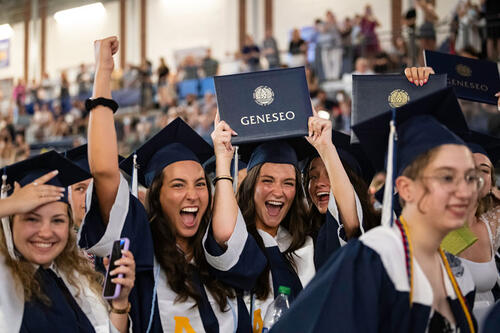 On Saturday, May 22, SUNY Geneseo held its 156th commencement with students and families attending in person for the first time in three years. The event recognized each of the nearly 1,100 undergraduates who received their degrees.

Howard Blumenthal ’74, an award-winning television producer, pioneer in early cable television, author, and field researcher, gave the commencement address and talked about the importance of global collaboration, not just a to pursue rewarding professional endeavors but as a means of changing the world. “This is the first time large numbers of humans, all over the world, are talking to one another. In the 20th century, this was impossible. Now, it’s no big deal,” he said. “Right now, people born in the 21st century represent 40 percent of the population of the world. You can do whatever you want—the numbers are on your side in a big way.”

Blumenthal also received an honorary doctorate of humane letters for his accomplishments.

The senior orators at the morning this year were Robert Colbath ’22 from Monroe, NY, and Peyton Mackey ’22 from Bergen, NY, both biology majors. Tiara Ora Edwards ’21, a history and communication double major from North Babylon, NY, who graduated last December, spoke at the afternoon ceremony.

Receiving the Richard Roark Award was Uniqua Lastar Jones ’22 from Yonkers, NY, a communication major with an anthropology minor. The Roark Award is presented to a graduating senior whose excellence in scholarship and community service emulates Roark, a former Geneseo professor of anthropology who was presumed drowned off the island of Guadeloupe in the French West Indies.

Sarina Singh ’22, a neuroscience major from Melville, NY, received the Student Association President’s Cup, given annually to a graduating senior who exemplifies superior service and dedication to the Geneseo Student Association.

Watch videos of the morning ceremony and afternoon ceremony