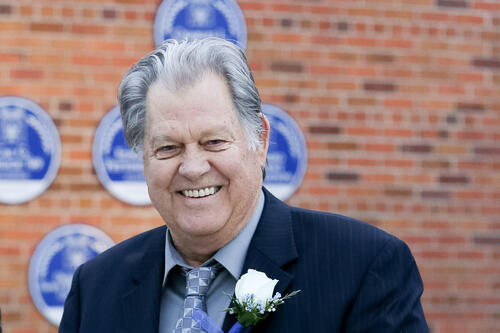 “The O’Connells recently joined Geneseo’s quest to address the most important factor leading to national prosperity — educational attainment,” said Geneseo President Denise A. Battles. “Greg’s career has taken him from a classroom teacher and New York City police detective to a successful investor and real estate developer. He attributes his accomplishments to skills he learned at Geneseo as an education major and has never lost his willingness to take less for himself in serving the greater good.”

Greg gives much credit to the training he received in the School of Education for his success. “Among other things, my education courses taught me the importance of listening and organizing,” said Greg. “Those are skills I use every day with people in my organization and with business associates. I give Geneseo a lot of credit for that early guidance. We hope our endowment will provide that same fundamental educational boost to students who would otherwise be lost.”

Among his most revered real estate development projects was the restoration of the Red Hook area of Brooklyn, which had greatly deteriorated over the years. Since 1992, he developed it into a thriving waterfront area that blends recreation, shopping, and affordable housing with light industry and business, and provides jobs for the residents from the neighborhood. His revitalization of Red Hook and his urban renewal efforts, in general, have earned him numerous awards and accolades.

“You can always have an impact on a neighborhood by renovating a couple of buildings on a block,” said Greg, “but if you want to have any sort of a vision or dream of really having an impact, you have to assemble blocks and blocks of property so you can have an impact on everything from housing to business to the arts.”

The O’Connells brought that same comprehensive can-do development spirit from Red Hook to towns and villages of Livingston County over the years in such communities as Mt. Morris, Dansville, Perry and now Geneseo. They purchased numerous properties in those communities with a vision of invigorating the communities with businesses and arts organizations for its residents, serving as a model for other upstate small towns.

The Geneseo Foundation recently honored Greg '64 and Elizabeth O'Connell with a plaque on Donors of Distinction Wall, which recognizes SUNY Geneseo’s most generous donors whose giving has totaled more than $1 million and who are passionate about providing current and future students with opportunities to thrive, succeed and prosper.

Greg also served on the Geneseo Foundation Board from 2001–16. He received the Alumni Association’s Professional Achievement Award in 2003 and the College’s Society of Old Main Award in 2014. Geneseo conferred an honorary Doctor of Humane Letters degree on Greg in 2010.
The O’Connells have two sons: Greg Jr. and Mike. Both are involved with the O’Connell Organization.