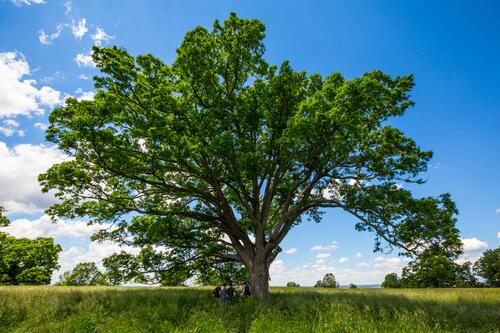 In a recent article in Annals of the American Association of Geographers, geographers from the State University of New York (SUNY) found that Native American land use—in particular, the use of fire—was critical in shaping the distribution of oak savannas in Western New York at the end of the 1700s.

Assistant Professor Stephen Tulowiecki and Professor David Robertson, both at SUNY Geneseo, along with Associate Professor Chris Larsen from the University at Buffalo, compared information gleaned from historical sources in order to map oak savannas and to better understand how both environmental conditions and Native Americans influenced their distribution around 1795.

The distribution and causes of oak savannas—ecosystems comprised of widely spaced trees (predominately oak) and prairie grasses—have long been debated and studied by geographers and ecologists. “Oak savannas may have been the product of environmental conditions, specifically dry soils and dry climate,” Tulowiecki said. “Or, oak savannas may have resulted from Native Americans, who used fire to thin out the forest to create areas for hunting or to make travel easier.”

The “thinly timbered” savannas were a unique ecosystem to find in Western New York (WNY) and the Eastern U.S., Tulowiecki notes, “because the dominant land cover was closed-canopy forests.”

Why Oak Savannas Are Important

Oak savannas are a globally endangered ecosystem. “We have maybe five good remnant locations of oak savannas, also known as oak openings, in New York State,” Tulowiecki said. “And within those ecosystems, there are rare plants. These landscapes are also beneficial for wildlife.”

They are also cultural landscapes—Native Americans maintained them for various reasons.

Tulowiecki said these spaces are essential reminders that the Americas were humanized—the landscape had been altered—before the Europeans arrived. “If you look at American mythology, you’ll hear again and again that this was a pristine wilderness, and it’s not true. This research counters that myth,” he said.

The researchers’ article “Oak Savannas in Western New York State, Circa 1795: Synthesizing Predictive Spatial Models and Historical Accounts to Understand Environmental and Native American Influences,” showed that three to six percent of the landscape in WNY was oak savanna. “We have historical evidence that Native Americans were burning it and maintaining it as an open landscape—otherwise with the absence of fire it would revert to forest.”

In the hope of better understanding how different conditions affected these ecosystems, the geographers mapped historic oak savannas in WNY using two approaches.

“Surveyors described oak savannas as ‘thinly timbered’ oak landscapes, ‘oak openings,’ or other similar terms,” Tulowiecki said. Looking for these keywords made the process of sifting through the handwritten records a bit easier.

The researchers then compared the locations of oak savannas with environmental conditions such as temperature, precipitation, soil pH, and soil moisture levels, and to the locations of Native American settlement. “We developed quantitative models to predict the location of oak savannas as well as to assess the relative importance of environmental conditions and Native American settlement,” Tulowiecki said.

“There was surprisingly good agreement between where land surveyors indicated oak savannas existed and where the records from early settlers and travelers suggested they existed,” Tulowiecki said. “And places where the models suggested that oak savannas were caused by Native American land use were confirmed by the historical accounts, too.”

For some areas, like around Geneseo, the study suggests that oak savannas were maintained mainly due to Native American burning. Overall, the models in the study imply that Native American land use and environmental conditions were equally influential in shaping the distribution of oak savannas.

“These oak openings were only occurring in drier conditions but also close to Native settlements; it’s sort of 50/50—but really, virtually every place that we’ve mapped oak savannas we have some description of fire or burning,” Tulowiecki confirmed.

A grant from the National Science Foundation supported the research.