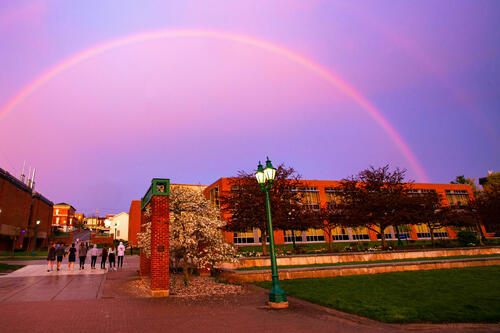 “Psychology is naturally at the heart of any human interaction,” says Matthew Pastizzo, associate professor and chair of SUNY Geneseo’s Department of Psychology.

Psychology, which is housed in Bailey Hall, is one of the college’s largest department and most popular majors.

“There are so many different directions you can go with this degree,” Pastizzo says. “We graduate 200 students a year, because they can go on into business management and marketing, HR, any field that involves human interaction—not to mention the obvious careers of counseling, social work, school counseling, and academia.”

Many psychology majors to go on to graduate school, and “we’re very near at 100 percent success for those who want to pursue graduate study,” Pastizzo reports. Asked why that is, he says, “Geneseo’s psychology department has a strong reputation due to the dedication of faculty to engaging. We’re not just teaching them—we’re actively making them part of the learning process. They’re actually on the front lines with us, working in our labs and going to conferences with faculty. We’re in high gear!”

As a result, he notes, those who choose to apply to graduate school are getting into top programs.

Julian ­­­­­David-Drori ‘19, who has learning disabilities, says he has never found academics to be a breeze, but was a co-winner of the department’s 2019 Outstanding Research Contribution award. He starts his master’s degree in the neuroscience and education program at Columbia University in fall 2020.

Initially solely a history major, David-Drori focused on psychology after he realized the department offered what he calls “another way to attack the problem” of neurodevelopmental disabilities. “So, suddenly, I’d found something I was really good at,” David-Drori reports, “and the psychology department was really helpful and welcoming.”

David-Drori worked in Associate Professor Vincent Markowski’s neurobehavioral toxicology lab. The work he did in the lab resulted in an article published in the Journal of Physiology and Behavior.

Other professors also had an impact on him, notably Pastizzo—“one of the best professors at the College”—and Monica Schneider—“phenomenal.”

David-Drori notes that all the psychology professors are “fantastic at applying everything to real life. It’s a science-based approach. It’s not just theory. They’re always giving examples.”

In addition, “they are so approachable,” he says. “They’ll work with you and make you better.”

That’s the advantage of going to a small college, according to David-Drori. “The professors want you to succeed,” he says. “They’ll meet with you. Many of them live nearby, and it’s a community as much as it is a college—one with a genuine sense of concern.”

And it’s not just the professors. “Monica Morris, the department secretary and assistant, is maybe the single most helpful person in the department,” David-Drori says. She gets it done!”

Although he graduated last year, David-Drori’s ties to the department remain strong. He volunteers in Markowski’s lab so he can continue building on his own research.

“The Psychology Department at Geneseo is what you make of it,” he says. “I highly recommend getting involved in research—not only does it help you professionally, but it’s a great way to apply what you’ve learned in class.”

David-Drori agrees with Pastizzo that Geneseo students are competitive and highly sought after, and he’s grateful. “Before I got there, I didn’t think I could do the things I did,” he says. “I can’t recommend the department highly enough. It will take you places!”