Assistant Professor of Rhetorical Communication | Learn more at leempierce.com
Blake B 117 (online for Spring/Summer 2020 at bit.ly/leehang)
(585) 245-6333 (voicemail only)
piercel@geneseo.edu 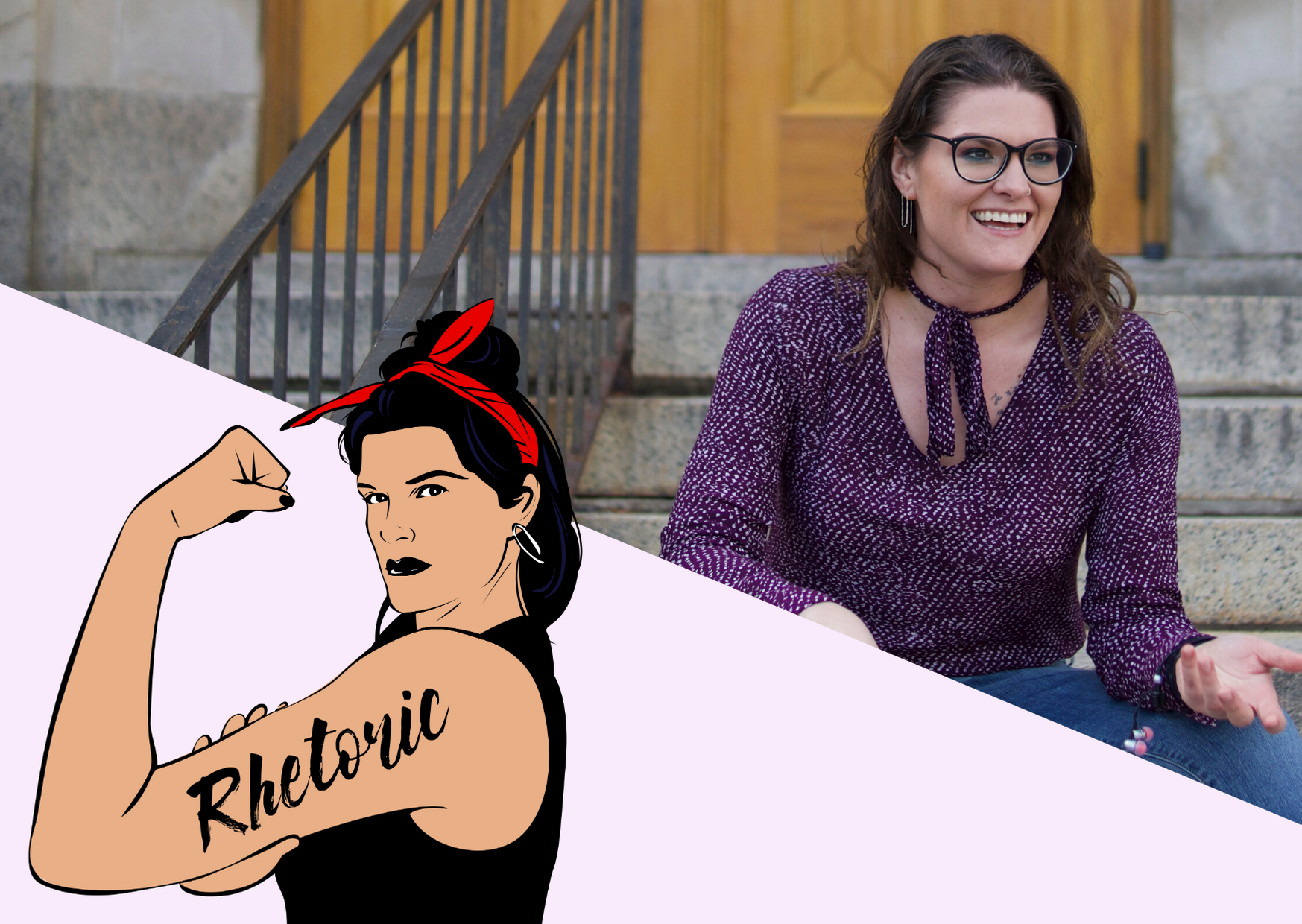 Cliches beware, Dr. Lee Pierce is on a mission to banish banality one speech at a time. Her counter-intuitive analysis of politics and culture are heard everywhere from your podcast playlist to TEDx stages. As Assistant Professor of Rhetorical Communication at SUNY Geneseo, Lee has helped (okay, sometimes forced) thousands of students to ditch cliches and say something that matters. Lee's research has appeared in top academic journals, winning several awards from the National Communication Association, and has been cited in Her Campus, LinkedIn Pulse, Hello Giggles, and on the One Big Tip podcast (forthcoming).
Thousands of people have tuned in to Lee’s podcast, RhetoricLee Speaking, for cheeky commentary on everything from Donald Trump and Tiger King to Rachel Hollis and Ferris Bueller. Lee reaches more people during summer workshops for the Georgetown and Harvard Debate Councils and helps new authors share their research on the New Books Network. Speaking of books, look for Lee’s first book “Syntaxing the Social” later this year and find Lee’s TEDx talks analyzing Beyoncé’s”Formation” and Taylor Swift’s “Bad Blood” on YouTube (along with a few attempts at stand-up comedy). Find Lee on Twitter, Facebook, Instagram, LinkedIn or wherever you see the hashtag #fightthecliche.

Join Lee every Tuesday for new episodes of RhetoricLee Speaking

If Ben Stein and the Kardashians had a baby that were raised by Janeane Garofalo in a recording studio, you’d have RhetoricLee Speaking. Listen every Tuesday for a whirlwind tour of banality across pop culture, political controversy, and whatever was on Netflix at 3 am.  Search "RhetoricLee Speaking" wherever you listen or find your platform at linktr.ee/rhetoricleespeaking. Learn more at rhetoriclee.com.

Lee in the Press

Lee is featured in Hello Giggles about how to support your friends with communication strategies rooted in the theory of attachment style: https://hellogiggles.com/lifestyle/attachment-styles-adults/

Lee is featured in Her Campus about the value of communication and english as majors: https://www.hercampus.com/school/geneseo/english-and-communication-majors-need-be-taken-seriously-hot-take

COMN 102 Introduction to Public Speaking (offered every semester) (3 credits) Public speaking is the practical art of self-discovery and world-making through performances that derive from the creation and delivery of personal, professional, and civic presentations. Students will craft and critique rhetorical acts—strategic symbolic attempts to overcome the challenges in a given situation to connect with a specific audience on a given issue to achieve a particular end. The course will emphasize a rhetorical perspective, stylistic sophistication, thematic coherence, creative evidence and dynamic delivery. The classroom experience depends on a hands-on approach including guided rehearsal, self-assessment, and immediate feedback.

COMN 354 Visual Communication/Rhetoric (offered every Spring) Media comes in as many forms as one can imagine–from a Twitter feed perused in an upper-class living room to the news-propaganda that plays through static over a sweatshop radio. Every media event is fundamentally an act of communication, responsible for transmitting information among people, but not all media events are speech. Speech–the live and unpredictable translation of worlds–is the energy inherent in communication; speech is what makes messages make a difference and fail to act according to our intentions. This class asks after the possibility of media that speaks, rather than just communicates, and provides opportunities for students to engage that question as critics and producers of mediated texts. From Beyonce's "Formation" to Trump's syntax to your very own YouTube channel, this course will approach media as a site of convergence for power and privilege and consider the possibility of saying something else.

COMN 356 Speech & Media (not currently offered) As we become fully immersed in the so-called "visual age," we need to be able to act as critical consumers and producers of the media that saturate our lives. This course engages in the visual age while pushing back against the assumption that "new" media cannot be studied through classic principles of style, composition, and design. We will engage visual communication as critics through critical scholarship that balances scholarly rigor with conversational style. We will also engage visual communication as producers through a personal brand project and short, no-dialogue narrative films. Throughout the course, we will approach visual culture as a site of convergence for power and privilege; images are not simply ideas or representations but forces that shape our consciousness.

COMN 356 Rhetoric of Stand-Up Comedy (new in Fall 2019) Since it's Greek origins as a form of classical parrhesia or truth-telling, stand-up comedy has been a vibrant form of cultural criticism, uniquely capable of normalizing and disrupting social values under the guise of entertainment. We often think of stand-up comedy as a subjective speech act, whose meaning is decided by each of us, individually. However, stand-up comedy actually lives and dies by rhetorical principles and social science theories, from litotes (understatement) to expectancy violation. This class is part rhetorical theory (what makes stand-up work?), part rhetorical criticism (how does a particular stand-up act normalize or disrupt dominant social values?), and part advanced public speaking (how can foundational rhetorical principles of invention, disposition, style, memory, and delivery be applied to create excellent stand-up performances?).The course fulfills requirements in the Personal and Professional and Intercultural and Critical Studies Tracks.